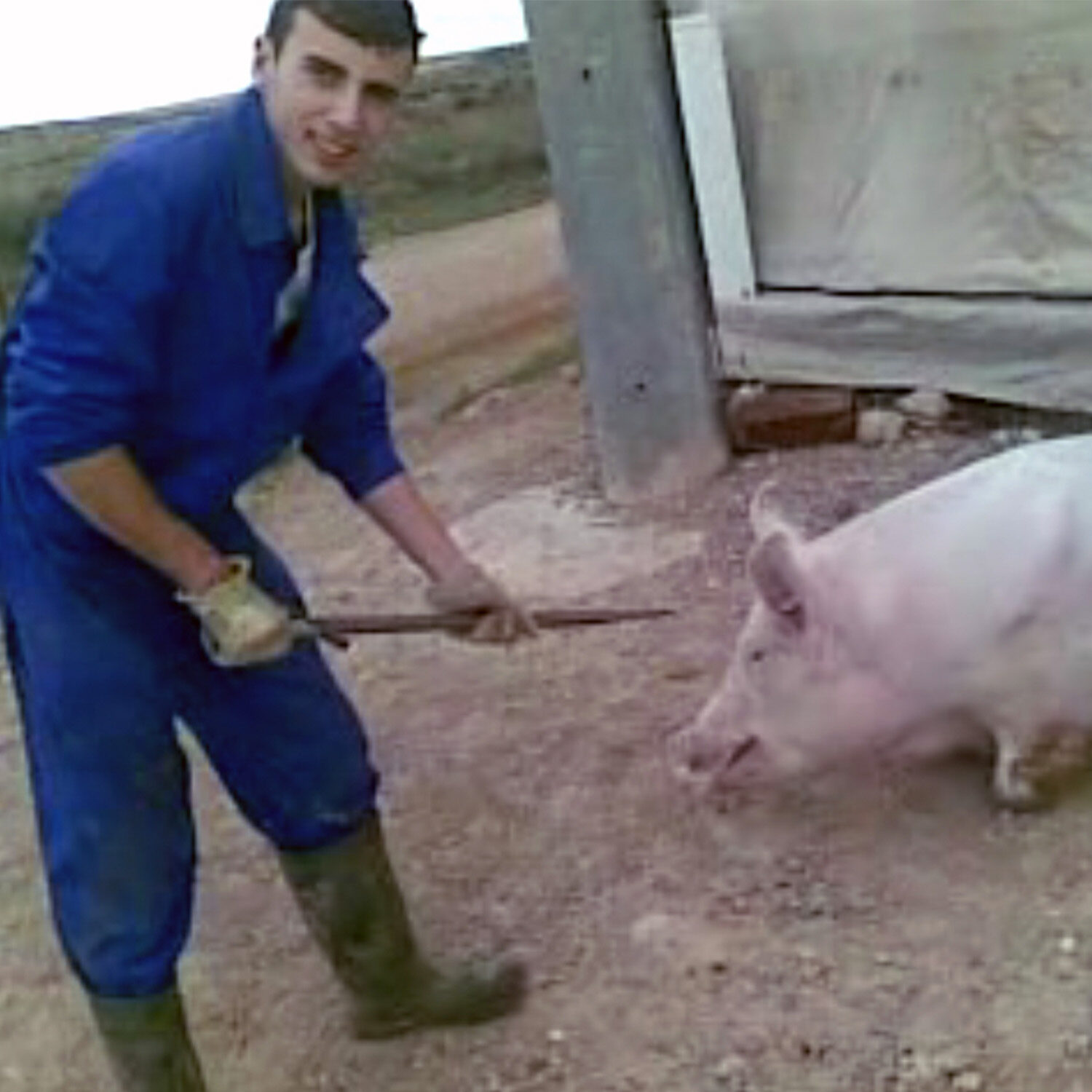 Investigations are the most powerful tool we have to show what happens to animals inside factory farms and slaughterhouses. Animal Equality’s investigators have uncovered time and time again how animals are abused by farm and slaughterhouse workers.

As investigation footage often shows, workers grow frustrated and even enraged when dealing with animals, especially large animals like cows and pigs. Because they are unable to communicate with the animals what they want them to do or what direction they want them to move, they often resort to methods that induce pain. And because the animals are scared and stressed, they naturally resist, further aggravating their handlers.

Animal Equality shared the story of a female buffalo in India who endured unspeakable cruelty as a result of frustrated handlers. As undercover footage shows, workers twist her tail, beat her with sticks, and violently push sticks into her genitals. All of this is done to induce pain as the tired buffalo struggles to climb the steep ramp onto a truck bound for slaughter.

Evidence like this is crucial in the prosecution of animal abusers. For the female buffalo in India, we have presented the findings to the authorities and are collaborating with law enforcement to identify them and bring them to justice.

Her story is not uncommon. It was not simply a case of the workers being a few ‘bad apples.’ Animal Equality has investigated more than 820 factory farms and slaughterhouses across 15 countries over the past 16 years. ‘Bad apples’ were exposed during many of these investigations.

In these cases, the evidence is turned over to authorities so action can be taken against those responsible. The images are also used as we lobby for stronger animal protection laws that hold abusers accountable. While it can take months or even years to strengthen laws or prosecute those who violate them, we know it is possible.

With our supporters by our side sharing the animals’ stories, signing petitions, and supporting our investigations, eight workers have been prosecuted for cruelty to animals across the UK and Spain.

These are three of those cases:

In 2012, three pig farm workers from El Escobar farm in Murcia, Spain were arrested within hours of Animal Equality turning over evidence of animal abuse. The footage was captured by a whistleblower who worked on the farm.

The video shows workers hitting pigs with iron bars and stabbing them with swords. The workers mock the pigs’ suffering in front of the camera. The video also shows one of the workers opening up a pregnant pig’s uterus with a knife to remove her babies while she was still conscious.

The men were convicted in 2016 and received the highest penalty for cruelty to farmed animals in the history of Spain – a one-year prison sentence and a three-year ban from working with animals.

In 2017, footage captured by Animal Equality investigators shows workers punching calves and kicking cows in the face at Pryland Farm in the UK. The images also show the dairy farm workers slamming large metal gates into cows and pinning calves to the floor while shouting at them.

One of the workers pled guilty to two counts of animal cruelty and received a twelve-week suspended prison sentence.

In May 2018, Animal Equality investigators filmed workers on Fir Tree Farm in Lincolnshire, UK. Footage shows workers kicking pigs in the face, jabbing them with pitchforks and slamming gates on their heads.

In November 2018, two of the workers pled guilty to animal cruelty. A third worker pled guilty in January 2019. The men were convicted in February 2019. They received eight-week suspended prison sentences, a community order of 100 hours of unpaid work, and were ordered to pay court charges.

If evidence had not been collected and these workers had not been brought to justice, how many more animals would have endured their abuse?

Animals can’t defend themselves. Their only opportunity is through the undercover investigators who will be there to document and denounce their abusers to the authorities.

The convictions that result from these images let those who violate animal protection laws know they cannot get away with their cruelty towards animals. And they let the meat, dairy, and egg industry know we are watching.

This is why investigations are necessary. And this is why we need your support so we may continue collecting this evidence to create stronger laws that protect farmed animals and bring those who violate them to justice.

These images are also the final reminder many of us need to ditch animal products and replace them with delicious plant-based alternatives. Please also take a moment to consider that we have the power to end all cruelties inflicted on animals by simply choosing to replace meat and other animal products with delicious plant-based options. Check out our helpful site LoveVeg for recipes and tips!