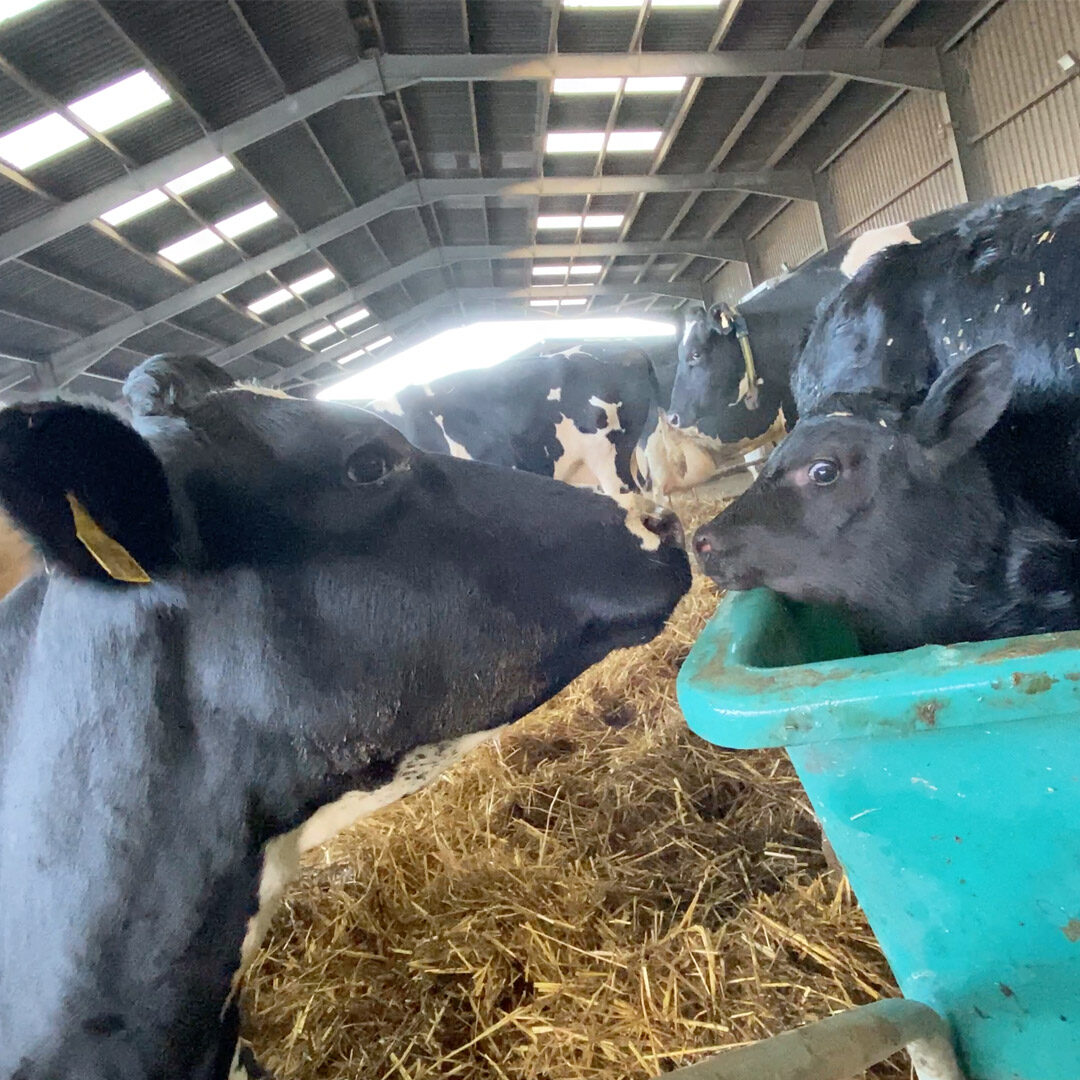 From the moment a female calf is born on a dairy farm, she enters an inescapable cycle of suffering. Her short, painful life begins in a lonely hut deprived of motherly care, and ends with her body being exploited over and over until she is discarded. Again and again, we’ve shown through our investigations that dairy and cruelty go hand in hand, no matter where in the world it’s practiced.

Our brave investigators work around the globe to expose the dairy industry’s abuse, and we’re committed to letting the world know how much cows suffer to produce a glass of milk or a slice of cheese.

Dairy Can’t Exist Without Suffering: A cow can’t produce milk unless she gives birth. Over the course of her drastically shortened lifespan in the dairy industry, she will be forcibly impregnated and carry and bear one baby after another, only to have them taken from her just minutes after birth. When her milk production slows and she’s broken down with illness, exhaustion, and grief, she’ll be sent to the slaughterhouse.

Male calves born into the dairy industry don’t fare any better–they are confined alone for months to tiny huts and sold to be slaughtered for meat. Many enter the veal industry, where they’re kept in tiny, dark crates, deprived of any natural activities or social interactions, and killed after a short, miserable life.

Dairy can’t exist without this cruelty and suffering, yet many people don’t know the terrible story behind the products they consume. The dairy industry is run by wealthy and secretive corporations who don’t want the truth to be exposed.

That’s why our investigations on dairy farms are so important. If our investigators aren’t there to reveal the shocking cruelties that animals experience every day, then the dairy industry would be free to continue its despicable practices. The responsibility is also on us, we must stop financing and supporting this cruel industry by eliminating dairy and dairy products from our diets.

The stories of suffering cows and calves must be told to stop the abusive practices of dairy farming. They are the reason we don’t hesitate to go up against this powerful industry.

The dairy industry wants you to think abuse and animal welfare violations are the result of just a few bad actors, but we know cruelty and violence are inherent to dairy production. Our investigations have proven this over and over.

Here are some of the investigations that exposed the dairy industry’s lies about how they treat animals.

These Babies Had No Chance: In the US, Animal Equality investigated Babybel’s supplier Tuls Dairy and revealed cruelty and neglect at their Summit Calf Ranch. Babies still wet from birth were tossed into flimsy outdoor plastic huts, where they endured extreme cold weather. Unable to warm themselves, some froze to death. Others experienced agonizing injuries to their feet and legs from frostbite and were denied any veterinary care. When their drinking water froze, calves suffered from dehydration and faced slow, painful deaths.

Calves on this farm commonly died of scours, a diarrheal disease that leads to rapid dehydration when untreated. They were left to perish in agony on top of piles of other dead calves.

The calves who survived were subjected to invasive and painful mutilations that are routine in the dairy industry, including castration by wrapping a tight band around their testicles that cuts off the blood supply and causes painful tissue death.

A First-Time Look at Mexico’s Cruel Dairy Industry: For the first time ever, Animal Equality’s investigators entered Mexican dairy farms to uncover the endless cycle of abuse animals face on these farms.

Cows experienced painful mutilations deemed so cruel that other countries had outlawed them, including tail amputations and dehorning when fully adult. Mother cows were repeatedly artificially inseminated by inexperienced workers, and their babies were taken away and locked in filthy, cold cages.

Cows were branded with hot irons and forced to swallow magnets to remove contaminants from the food in their stomachs. When the industry no longer had any use for them, they faced the horrors of government-owned slaughterhouses. Numerous animals had injured and infected udders from mechanical milking machines and languished with untreated infections.

We’re using these distressing images from our dairy investigations to call for legal protections for farmed animals in Mexico. The extreme suffering we’ve shown reveals that legislation against farmed animal cruelty is long overdue, and we’re campaigning tirelessly to demand that legislators take action.

Egregious Welfare Violations on a UK Farm: Just last month, Animal Equality released video footage of an investigation on Madox Farm, which supplies milk for large companies like British Airways and Amazon Fresh. Our investigator recorded extensive violations, including beating and kicking cows in the face and stomach, violently twisting their tails, and hitting them with sharp, metal shovels. These cruel methods were used to try to move cows who had collapsed, adding to their pain and distress.

One sick cow died overnight, after suffering for hours with an unborn calf dead inside of her, despite a veterinarian advising immediate euthanasia.

Our video footage was viewed by millions of people when it aired on BBC’s Panorama. On behalf of Animal Equality, the legal firm Advocates for Animals submitted an official letter of complaint to authorities demanding that the farm be prosecuted for these troubling welfare violations.

This wasn’t the only time we’d documented abuses on UK dairies. In fact, our investigators visited four farms over the past six years, and without fail, they found numerous cruelties on every farm.

Extreme Suffering of Buffalos: Italy is known for its mozzarella cheese, but until Animal Equality’s investigators exposed the cruelty of the dairy industry, little was known about the buffalos who suffer for this ubiquitous Italian product.

Images collected by Animal Equality and video acquired by Vier Pfoten International show animals being kept in filthy, unhygienic conditions on a farm in Northern Italy. Buffalos were forced to live in mud and feces so thick that it came up to their knees. Equipment and animal pens were poorly maintained and falling apart, creating dangerous conditions for the buffalo.

Buffalo calves were separated from their mothers and abandoned to die of thirst and hunger. The investigators found flies everywhere, as dead animals were left to rot among the live buffalo. Untrained workers administered medical treatments rather than getting proper veterinary care for the animals.

Over half a million buffalo exist in these unacceptably cruel conditions, whose stories would never have been told if not for our brave investigators.

Heartbreak in Every Glass of Milk: Animal Equality’s investigators infiltrated 135 dairy farms in India to show how cruelty is inherent in milk production. We found serious welfare violations on every farm we visited, including cows tethered with ropes so tightly that they couldn’t move and babies torn away from their mothers. Animals spent their entire lives tied with ropes so short they could barely lay down.

Cows were injected with harmful drugs that caused painful symptoms of labor and destroyed their reproductive systems under the mistaken notion that they increased milk production. Our investigators documented routine use of these drugs, though they are banned by the Indian government.

We even witnessed a cow being bludgeoned with a hammer, in a heartbreaking act of cruelty.

Sadly, these are all considered standard practices in India, the world’s largest producer and consumer of dairy.

What You Can Do

With every investigation we conduct, we are opening people’s eyes a little wider to the abuses that happen in the dairy industry.

Together, we can fight back against the dairy industry’s lies and secrets and change the world for animals. We’ve achieved major victories before and we’ll do it again. But it’s only possible if those who have the heart to stand up for animals take action together.

Will you stand with us and support our investigators by making a donation today?

The dairy industry won’t stop hurting and exploiting animals unless we stand in their way. With every glass of milk or piece of cheese with have the choice to choose a world where cows and baby calves are not abused. Visit Love Veg for lots of delicious dairy-free recipes.

Join us in our fight against cruel dairy by donating to our investigators’ vital work, and ensure that the stories of suffering cows and calves will be told to the world.

The journey that we’re on together is a tough one, but it will be worth it when, one day, animals are finally treated with the respect and dignity they deserve.