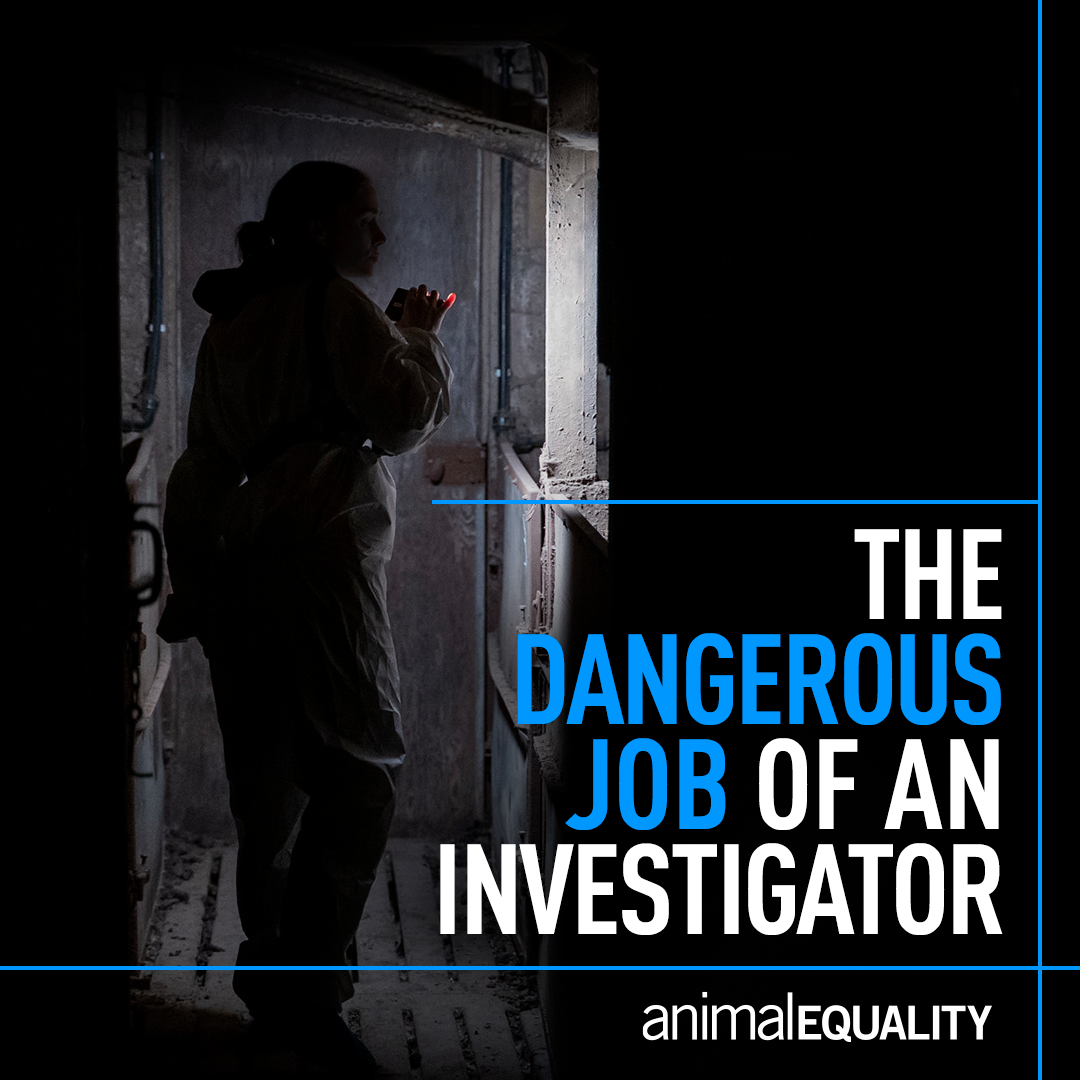 The Dangerous Job of an Undercover Investigator

Sharon Nunez
December 14, 2021
Have you ever wondered what it takes to create an investigation video? Learn about the dangerous conditions and discriminatory laws investigators face to expose animal cruelty.

The animal agriculture industry is cloaked in secrecy and deception, and every day Animal Equality’s brave and compassionate investigators fight back to expose the industry’s animal abuse. Our investigators face dangerous environments and risk their own safety to bring vital information about animal suffering to the public. In addition to the physical dangers, investigators are prevented from exposing farms in certain U.S. states, due to discriminatory and unconstitutional ag-gag laws that unjustly target undercover investigations.

Ag-gag laws are state laws intended to prevent the public from learning about the intense suffering of animals on farms. These laws make investigations of farms illegal in some states. Ag-gag laws violate the right to freedom of speech and exist solely to allow the agriculture industry to abuse animals, while punishing anyone who tries to uncover their deceptive practices. Animal agriculture industries continue to profit from the lies they tell to the public about “happy” animals, and ag-gag laws allow them to get away with it.

According to the American Civil Liberties Union (ACLU), undercover investigations are powerful tools that can be used to inform the public about wrongdoing and deceit in corporations and industries, and laws against these investigations put our civil rights at risk. Will Potter is an investigative journalist and internationally-recognized civil liberties advocate who has written extensively about ag-gag laws. He has been a plaintiff in two court cases challenging ag-gag laws as unconstitutional in Idaho and Utah. Potter says that the laws set a dangerous precedent by giving the agriculture industry complete control over what the public knows about their practices. This means no one without a vested interest in the industry monitors what happens to animals on farms. Ag-gag laws threaten not only the work of investigators to uncover animals’ hidden suffering, but also free speech, the environment, worker safety, and the public health of surrounding communities.

Without undercover investigations, no one would hold the powerful animal agricultural industry accountable for their actions. Farmers and agribusinesses don’t want people to see what goes on in their facilities, because they know the public will be shocked and outraged by the constant cruelty animals endure on farms. That’s why it’s so important for Animal Equality investigators to be able to enter these dangerous and unsanitary facilities to bring animals’ experiences to light.

Ag-gag laws were first developed in the 1990s, but were not heavily used until a 2011 undercover investigation revealed the cruel methods used to kill piglets at Hormel Food in Iowa. The Iowa legislature reacted quickly and passed an ag-gag law the following year. Since 2012, other states have followed with their own ag-gag laws. These laws criminalize activities like video recording or photographing farms without the permission of the owner and prohibit acquiring a job for the purpose of collecting evidence and images from a facility. Arkansas, Missouri, Montana and North Dakota currently have active ag-gag laws.

Because these laws are unconstitutional and violate the basic rights of the U.S. public, we’re challenging them and demanding our right to expose the deceptive practices of big agriculture. Ag-gag laws in Iowa have been struck down twice in courts, only to be re-introduced in 2020 and 2021. Court challenges have already been filed against these new laws seeking to overturn them.

Animal Equality, along with the Animal Legal Defense Fund, Center for Biological Diversity and Food Chain Workers Alliance, filed a lawsuit in 2021 challenging an ag-gag law in Arkansas. This Arkansas law not only bans undercover investigations of agricultural facilities, but also nursing homes, daycare centers, and others–ensuring that no one from the public would be able to call out Arkansas businesses for abusive practices.

Animal Equality went to court over this violation of the public’s First Amendment rights. When our lawsuit was initially dismissed by a lower district court, we appealed and convinced the Eighth Circuit Court to reinstate our lawsuit. In doing so, the court recognized our right to sue to demand that this harmful law be struck down. Ag-gag laws hurt our most vulnerable populations, and we won’t stop fighting against these laws and working to safeguard our right to expose corporate abuses wherever they occur.

Ag-gag laws in Kansas, Idaho, North Carolina, Utah, and Wyoming have been deemed unconstitutional, and the fate of Arkansas’s law is currently being decided in court. Other states have tried unsuccessfully to pass ag-gag laws, but the bottom line is that ag-gag is a blatant attempt by big agribusinesses to hide the disturbingly cruel treatment of animals on farms.

Investigators also face personal harm and injury in these hazardous and unhealthy working conditions, and may even risk their lives. Farms are often shrouded in secrecy. In 2019, Animal Equality investigators exposed the connection between animal agriculture and deforestation at great risk to their own personal safety, when they discovered that farmers were illegally setting fires to clear land for grazing cows. Investigators have also braved untreated sewage spills to uncover appalling conditions for pigs on an Italian farm. They’ve infiltrated wet markets in China and faced unsanitary conditions and potential infectious disease exposures, and they’ve risked physical attacks or retaliation to expose cruelty in unregulated slaughterhouses in Mexico.

Despite these dangers, Animal Equality investigators continue their work because they know the evidence they gather is critical to unmasking animal abuse. To date, our investigators have exposed over 800 factory farms and slaughterhouses across 14 countries. They’ve pioneered the use of new technology to film cruelty to animals on land, sea, and air. No matter where abuses are happening, Animal Equality’s skilled investigators are committed to revealing the truth about animal suffering.

You can support our investigators’ vital work to end animal cruelty by making a contribution today or joining our Animal Allies with a monthly gift to help animals all year long. Right now, a generous donor has agreed to match all donations, and you can make twice the impact!

You can also help animals by sharing our investigators’ story widely, and leaving all animals off your plate.