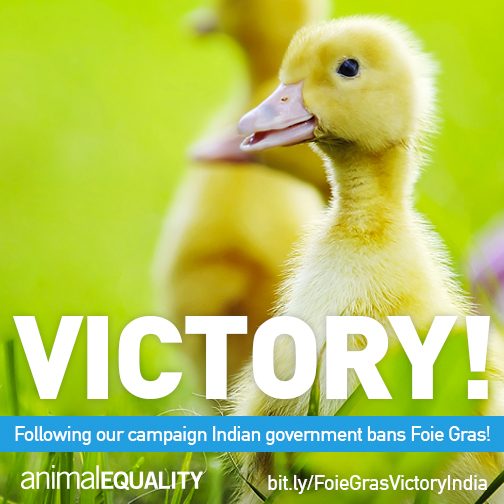 Following Anti Foie Gras campaign launched by Animal Equality in 2012, on July 3, Directorate General of Foreign Trade issued a notification stating that the import of foie gras is revised from ‘free’ to ‘prohibited’.

In 2012, Animal Equality carried out an investigation into the foie gras industry in the EU. The investigation revealed the shocking reality of life for ducks and geese confined and force-fed for foie gras production in France and Spain.

Animal Equality presented an extensive report  to the government, including reviews from the Food and Agriculture Organisation of United Nations, European Scientific Committee on Animal Health and Animal Welfare, making an appeal to the Minister of Commerce to ban the import of foie gras.

Animal Equality’s India Amruta Ubale explains,”The ducks are confined for 12-17 days in the fattening facility in cages which are the size of their bodies. The birds are grabbed by their neck and enormous quantities of food is force fed through a long metal pipe which is pushed in into their stomach through esophagus. They are force fed three times a day, so that their liver can fatten up. This is called a fattening process. The enlarged liver is up to 10 times the original size. In medical terms this enlarged liver is called hepatic lipidosis. This is a standard procedure followed in most foie gras farms. Force feeding can cause serious damage to the esophagus which can lead to death. The mortality rate at foie gras farms is very high due to the severe damage caused to the internal organs of the ducks.”

Amruta Ubale of Animal Equality says, ‘We are very thankful to the government. With this prohibition India has taken a progressive step in stopping the unnecessary animal suffering.”

Animal Equality is committed to ending foie gras everywhere. You can help ban foie gras in the United States by signing our petition.