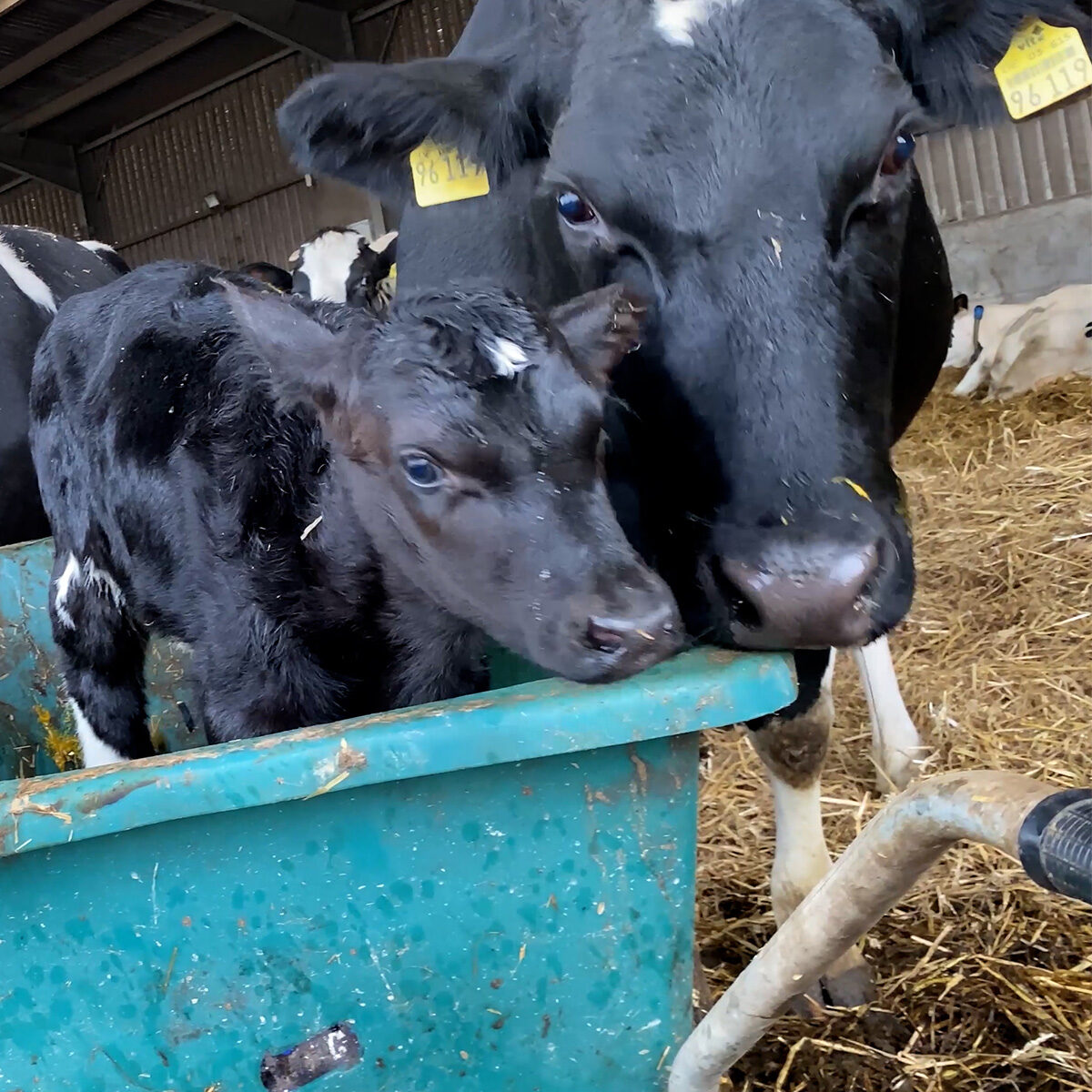 Widely known for playing Professor Sprout in “Harry Potter,” British-Australian actress Miriam Margolyes has been on a “journey of discovery” after learning about the abuses of farmed animals. She is now using her platform to raise awareness about calf-cow separation in the dairy industry by sharing an important message with you. This message comes soon after Miriam watched undercover footage captured by one of Animal Equality’s investigators inside a UK dairy farm – Madox Farm.

What did the footage show?

Footage captured inside Madox Farm aired on BBC’s “Panorama,” a popular British current affairs documentary program, and was watched by over 1.7 million viewers. Among other abuses uncovered, the footage showed newly born calves being separated from their mothers just hours after birth.

People across the country watched as a worker on the farm placed a newly born calf in a wheelbarrow and carried them towards the farm gate, with the mother cow chasing behind. As the worker closed the gate and took the calf away, viewers listened to the mother’s cries and saw her despair as she watched her baby disappear, never to return.

Why are calves separated?

Newborn calves are ripped from their mothers on dairy farms across the globe as a fundamental part of milk production. Like humans, cows must be pregnant to produce milk. The dairy industry breeds cows and farmers artificially impregnate the females by hand.

So, the dairy industry separates them. The mother and her calf will often only have a few hours together before the calf is taken away forever. Mother cows have strong maternal instincts and have been known to cry for hours or days after the separation.

But this is just the beginning for the mother cow. The process will start all over again – she’ll be impregnated, go through nine months of pregnancy, and her calf will be taken away again. This will happen over and over again until she becomes ‘unproductive’ – in other words, she doesn’t produce enough milk to be profitable for the dairy industry – and then they’ll send her to the slaughterhouse to be killed.

This painful reality of the dairy industry is hidden from so many people. Actress Miriam Margoyles was among those shocked when this horrifying truth was revealed to her. Now, she has a message for you.

I’ve been on a journey of discovery…. I don’t mince my words, so I will tell you the truth: it broke my heart. But I am also thankful that this has been brought to my attention. Everyone deserves to know the truth. If we’re successful, more people will choose plant-based options and they’ll drink less cows’ milk, which means fewer cows will be separated and killed. I really believe we can make a difference. The world is harsh. Let’s make it kinder.

How can you help?

You deserve to know the reality behind factory farming, and farmed animals deserve a better life. By donating to support Animal Equality’s investigations, you are helping expose the secretive world of industrial animal agriculture so we can help end the horrific animal abuse.

Whether cows are raised on a small-scale organic farm or an intensive one, they all endure the pains of having their calves taken from them time and time again. By choosing plant-based dairy alternatives, you are helping cows and their babies.