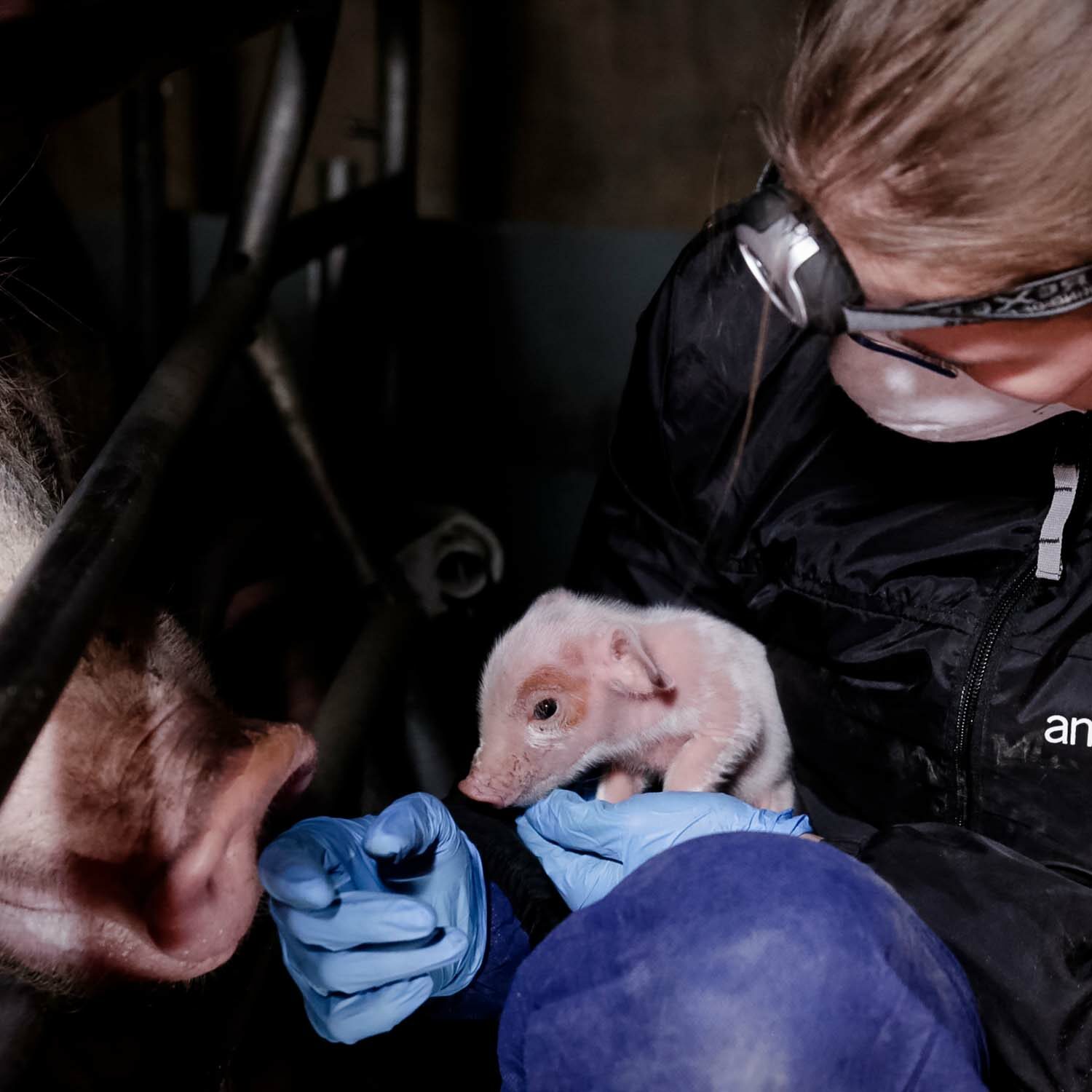 Claire Roberson Communications Manager
December 27, 2022
Animal Equality is achieving historic progress for animals year after year. From groundbreaking policies made by global corporations to shocking investigation releases that are changing the hearts of millions, these steps forward are impacting an estimated 200 million animals so far this year. Here are our top 10 biggest moments for animals in 2022!

You are helping achieve incredible results for animals! By making donations, signing petitions, choosing a plant-based diet, and taking online actions for animals, an estimated 200 million animals around the world are being impacted so far this year…and the year still isn’t over yet.

1. World’s Largest Food Service Provider Commits to Ending the Use of Gestation Crates For Mother Pigs

In July, Animal Equality launched a campaign against the world’s largest food service provider in the world—Compass Group. The multibillion-dollar company, which provides catering for businesses, events and universities, committed to ending the use of crates for pigs in 2012. After a decade of inaction by Compass, the company abandoned its promise. Animal Equality and our supporters took action to hold the company accountable.

Over 2,000 emails were sent to Compass Group’s leadership team by Animal Equality supporters. And thousands of comments were posted to the company’s social media pages demanding they reinstate its commitment to protecting mother pigs in its supply chain.

Animal Equality informed Compass Group’s major clients—Google, Boeing, Coca-Cola and Nike—about the failed commitment and urged them to break ties with Compass as a stand against animal cruelty. One client, Bank of America, remained silent on the issue, so Animal Equality took to the streets and protested in front of the institution in Austin, Texas.

Within just a week of the protest, Compass Group announced its commitment to end the use of crates for pigs in its supply chain by 2023. The policy also includes meaningful protections for chickens and hens, as well as a commitment to providing regular updates on its progress.

In October, Animal Equality launched a global campaign against the slaughter of horses—an ongoing practice many people don’t know about. In just two months, over 132,900 supporters (and counting) have signed the international petition.

The United States also contributed to the global horse meat trade. Every year an estimated 30,000 horses are sent across our borders to Mexico and Canada to be killed for their meat.

A month after the launch of the campaign, Animal Equality released an investigation showing American horses awaiting slaughter in Zacatecas, Mexico. These horses were seen with yellow USDA tags, identifying them as American.

One horse, identified by his USDA tag number 5036, approached Animal Equality investigators during filming. These would be the last known images captured of him before being slaughtered the following day.

In the second part of the investigation, footage shows what happens to horses inside Mexican slaughterhouses. As footage shows:

Fueled by the images, supporters took action to demand and end to the slaughter of American horses. Hundreds of tweets were sent to Congress leaders Charles Schumer, Nancy Pelosi, Mitch McConnell and Kevin McCarthy to demand a permanent ban. And, on December 8th, around a dozen supporters joined Animal Equality for a protest in front of the US Capitol. These efforts are ongoing in 2023.

3. Italy Bans the Killing of Male Chicks in the Egg Industry

This past August, the Italian Chamber of Deputies passed an initiative to end the mass killing of male chicks in Italy’s egg industry. This is a historic milestone in the legal protection of animals in Italy, protecting around 35 million chicks every year.

In the egg industry, male chicks are ground up alive because they are not seen as profitable. They cannot lay eggs and they are not one of the fast-growing breeds used for meat. Italy now joins France and Germany in banning this unnecessary and inhumane practice.

The ban will go into effect by 2026 to allow time for the introduction of technologies to replace the method of simply killing baby birds after hatching. One such technology can identify the sex of an embryo prior to hatching and before the formation of a nervous system.

Animal Equality has been campaigning to end the killing of male chicks globally. Since our campaign launch in 2020, over 100,000 supporters have signed the petition in Italy to ask the government to end this practice. In addition to Animal Equality’s global campaign and petition, our investigators have captured images of the killing of male chicks in 9 chicken hatcheries in the United States, Spain and Mexico. This work has been so influential that it was mentioned in the amendment itself.

4. Hidalgo Becomes the First State in Mexico to Protect Farmed Animals in Its Law

In June, Hidalgo made history as the first state in Mexico to introduce an entire chapter of law to protect animals. It is the most comprehensive and progressive set of animal welfare laws to exist in all of Mexico.

Animal Equality has led the efforts to call on the Hidalgo Congress to create stronger laws for animals. Two investigations were released by Animal Equality showing animals suffering extreme neglect and violence inside slaughterhouses in Hidalgo. Inspired by what they had seen, supporters completed a series of actions over the five months leading up to the vote demanding change.

5. Groundbreaking Dairy Investigation Airs on BBC’s Panorama and is Viewed by Millions

Images from an investigation by Animal Equality into a dairy farm in South Wales aired on the UK’s popular BBC ‘Panorama’ show. The 30-minute long episode uncovered the UK dairy industry—’A Cow’s Life: The True Cost of Milk.’ Millions of people tuned in to see the shocking footage.

On Madox Farm in Carmarthenshire, South Walks, over 650 cows and their calves are subject to deliberate abuse and violence. The footage also showed the routine, heartbreaking practice of separating cows from their babies moments after birth. This practice is to keep calves from drinking their mother’s milk so it can be sold to humans.

Within just minutes of the episode airing, thousands of people took to social media to share their shock. Many people were unaware of the practices they were now witnessing—all for a glass of milk.

Exposing so many people to this reality of animals exploited for dairy is an accomplishment. The media is not always willing to show this cruelty. But this primetime episode showed millions what has been hidden from public view for so long.

In Brazil, around 84 million baby birds are ground alive in the egg industry because they are not seen as profitable. But a new technology that detects the sex of an embryo before hatching offers an alternative to this unnecessary and cruel practice.

Italy, Germany and France have introduced bans with the help of this new technology. Now, Mantiqueira has committed to using technology like this as soon as it becomes available to spare an estimated 7 million male chicks every year.

In October, Animal Equality joined over 20 animal protection organizations across Europe in a new campaign against grocery store giant Lidl. The campaign is focused on asking the company to make a commitment to reduce the suffering of chickens in its supply chain.

Lidl is one of the largest grocery store companies in Europe. Millions of chickens are raised and slaughtered every year to be sold in Lidl stores. Most of these are ‘fast-growing’ chickens.

Fast-growing chickens have been selectively bred over generations to grow faster and larger than normal. This has significant health consequences for the chickens. They suffer from a number of health issues—heart attacks, organ failure and debilitating leg deformities.

Hundreds of companies have made a commitment to end the use of fast-growing chicken breeds including some of Lidl’s direct competitors. But Lidl is refusing to make the same commitment.

In Germany where Lidl was founded, more than 30 protests took place in a single month. Other protests have been held in Italy and the UK and more action will be taken in 2023.

Animal Equality discovered that the Scottish Government wasn’t conducting routine inspections of fish slaughterhouses. This meant the welfare of these fish was left in the hands of the workers, who are under pressure to work as quickly as possible.

Sources of the Government said they would start inspecting fish slaughterhouses following the investigation release, but nothing happened.

In response, Animal Equality began working with aquatic animal experts to produce and send a letter to the Government’s Animal Welfare Committee, which provides independent advice to the Government on actions it should take to protect animals.

Months later, we found our efforts had been successful when the Scottish Government instructed the Animal Plant and Health Agency to start routine welfare-oriented inspections.

Now we’re continuing our efforts by fighting for the Government to make surveillance cameras mandatory inside all fish slaughterhouses across the UK and for that footage to be made available to the public for scrutiny.

9. Brazil Pauses the Progression of Its Dangerous ‘Self-Control’ Bill

Earlier this year, the Brazilian Government attempted to push through a harmful bill that would end Government inspections and allow slaughterhouses to regulate itself.

The Bill threatens to leave millions of animals vulnerable to illegal and deliberate abuse in slaughterhouses across the country every year, so Animal Equality took immediate action to stop it.

Here’s how we took action:

Currently, the Self-Control Bill is still paused and there is hope it can be stopped for good. This would be a monumental achievement that would protect billions of animals from even greater cruelty and neglect inside slaughterhouses.

Thousands of supporters have signed the petition and donated to support the campaign, leading to Animal Equality’s attendance at the UK Parliament on November 21st.

Over the years, Animal Equality has collected hundreds of hours of footage from inside factory farms and slaughterhouses showing farms breaking animal welfare laws without serious consequences.

The event is one of the first steps in a campaign that could impact millions of animals every year.

The top moments of 2023 are yet to be written and we need your support to help animals who are abused and neglected in factory farms and slaughterhouses around the world.

Make a resolution to help animals in 2023 by making a donation today.

Until December 31st, all donations made to Animal Equality are being matched by a generous donor. This means you can give twice as much to help animals at no extra cost to you.

Here’s how it works:

That’s $50 extra going to help animals at no extra cost to you!

Even better, if you sign up to be a monthly donor, your donation will be matched every month for 12 months!

You can choose any amount. All donations will be matched.

Yes, I want to help animals

As we enter the New Year, please consider making the ultimate compassionate decision for animals. It’s a decision that you can make right now and every day that protects farmed animals like cows, pigs and chickens from suffering for meat, dairy and eggs. Choose animals. Go plant-based today.

Meat, dairy & eggs are never cruelty-free. The ultimate way to support farmed animals is to leave their suffering off your plate.