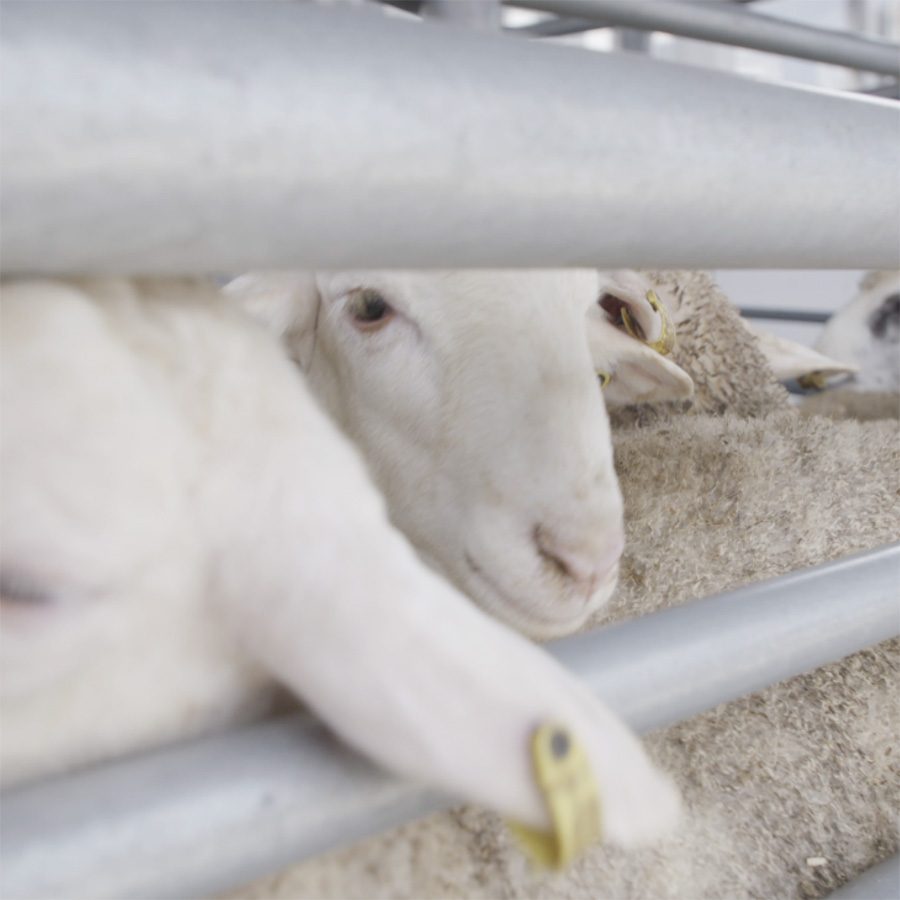 A new investigation from Animal Equality shows the pain and torment of Spanish lambs as they are shipped across long distances, with journeys lasting up to ten days, and slaughtered while fully conscious after arrival.

THE DETAILS: In distressing footage shot by our investigators, we documented how lambs, all less than a year old, are treated during their live transport from Spanish farms. Tens of thousands of lambs are first shipped hundreds of miles by truck to Spanish port cities and then forced to travel by sea to countries in the Middle East to meet the demand for meat coinciding with Ramadan and the feast of the Sacrifice of the Lamb. Lambs are particularly sensitive animals that become paralyzed when they are afraid. During the journey, workers are shown throwing the animals and grabbing them by their legs to prevent them from retreating.

A TERRIBLE JOURNEY: Once the lambs are loaded onto the ships, they have to endure a 10-day journey in which there is no guarantee that the basic animal welfare standards set by the European Union will be met. To those in charge of their fate, it doesn’t matter if the lambs are injured during the journey or are in an advanced state of pregnancy—the only requirement is that they arrive at their destination alive. When they reach the country that purchased them, the lambs will have to then spend between 15-21 days in quarantine until they’re taken to slaughterhouses where they’ll endure an agonizing death. According to ritual slaughter rules to ensure the meat is halal, the lambs will be sacrificed with their throats slit and left to bleed out to death while fully conscious.

COVID-19 A FACTOR: The meat industry is utilizing the exports of lambs to Middle East countries as a way of compensating for the lack of domestic demand due to the COVID-19 pandemic, as 90% of these animals are consumed in bars and restaurants. Data indicates that this year alone more than 250,000 lambs will be sent to countries in North Africa and the Middle East for Ramadan celebrations.

BILLIONS OF ANIMALS ENDURE CRUEL LIVE TRANSPORT: Worldwide, more than two billion farm animals undergo long-distance of travel each year as a means of transporting live meat. Thousands also die during long sea journeys, with their bodies thrown overboard, appearing on beaches days later. In a 2019 report following an accident in which 14,000 sheep drowned in the Black Sea while being transported from Romania to Saudi Arabia, the European Commission acknowledged numerous deficiencies in this type of long-distance transport. The report points out that the welfare of these animals depends largely on the conditions of the ship and because there are no suitable inspections carried out, there are no guarantees that these ships have an adequate drainage or ventilation systems. In fact, for ships bound for Saudi Arabia, port operators or livestock owners are not even allowed access to the vessels’ interior.

WHAT WE’RE SAYING: “Our investigations have clearly documented the mistreatment of lambs on these trips. It’s time to demand that both the Spanish government and the European Commission ban long-distance travel of live animals,” says Silvia Barquero, Executive of Animal Equality Spain.

WHAT ELSE WE’RE SAYING: “From farms to slaughterhouses, animals exploited for food suffer tremendously. What is often forgotten in this never-ending cycle of violence is the immense cruelty that happens when these animals are transported to be slaughtered. It’s more than time for this cruelty to be stopped and Animal Equality will continue to use its investigations to expose these truths,” says Sharon Núñez, President of Animal Equality.

LIVE TRANSPORT OF ANIMALS OUTSIDE OF THE EU MUST END: In Europe, Animal Equality launched a petition addressed to the European Commission and the Ministry of Agriculture, Food and Fisheries calling for an end to long-distance transport to countries that do not guarantee basic EU animal welfare standards. We are hopeful that our efforts will lead to much-needed change and will prevent the suffering of hundreds of thousands of animals every year. In the meantime, you can make a difference for animals by sharing out our investigations and ditching animal products. Saving lives starts with consumer choices, and you can help end suffering by making the switch plant-based. The animals, the planet, and your health will thank you.