As one of the largest hotel chains in the world, a commitment from RIU would improve the lives of countless hens each year.
April 12, 2022 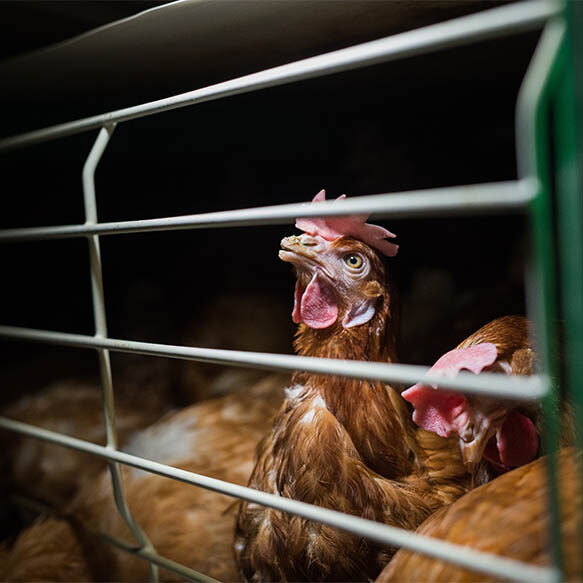 Today, Animal Equality has launched an international campaign calling on RIU Hotels & Resorts to eliminate cages from their egg supply chains and commit to sourcing 100% cage-free eggs worldwide. After 2 years of dialogue with the company, and having no concrete plan to ban the use of eggs that come from battery caged hens, we are joining forces with our teams across the globe to push the company to finally adopt a comprehensive global policy that eliminates the use of cages for hens.

RIU Hotels & Resorts is a family-operated hotel chain established in Spain in 1953. They have grown to become one of the largest hotels in operation today, with 100 hotels in 20 countries. Their US locations include popular tourist destinations such as Times Square in New York, Miami Beach, Florida, and Fisherman’s Wharf in San Francisco, California.

A poor attempt at animal welfare

While RIU Hotels & Resorts has taken initial steps to address the welfare of the animals within their supply chains, its current “policies” do not mention specific animal welfare issues they are addressing nor when those issues will be phased out or replaced with higher welfare products. Therefore, the “policies” are utterly meaningless, and the company is still supporting the torture of hens in its markets all around the world with no end in sight.

Customers going to luxury 4 and 5-star hotels and resorts are expecting high standards for animal welfare, but instead are purchasing meals that are so cruel that they are illegal in many U.S. states.

On farms that use battery cages, a hen is confined in a cramped, filthy cage with six to ten other birds—each with no more than the space of an iPad to herself. The cages are so small and crowded, they cannot engage in their natural or instinctive behaviors. Often, their bodies are caught in the caging, resulting in fractured or broken bones, deformities, and severe feather loss. Some hens, too exhausted or unable to move, end up trampled to death by their cage mates.

Eliminating cage systems markedly improves the wellbeing of the hens raised in supply chains. Nine U.S. states have banned cages for hens, including Nevada, Utah, Colorado, Michigan, Washington, Oregon, California, Massachusetts and Rhode Island. While more must still be done to make long-term changes to their quality of life, this is a significant first step for hens used for eggs.

As consumer demand for improved animal welfare continues to grow, global companies and industry leaders have adopted policies banning cages. Major hotel chains like Nickelodeon Hotels & Resorts, Best Western, Hilton, Marriott, Four Seasons, Wyndham, Palladium, and many others have already pledged to not buy or use eggs that come from caged hens.

More than 100 other global commitments to end the use of battery cages have been made by some of the largest companies in the world, including Burger King, Dunkin’, Krispy Kreme, Unilever, Nestlé, Aldi, InterContinental Hotels, Sodexo, Kraft Heinz, Compass Group, Shake Shack, Famous Brands, Costa Coffee, and Barilla.

As one of the largest hotel chains in the world, a commitment from RIU would improve the lives of countless hens each year!

To help push RIU Hotels & Resorts towards a commitment to banning cages, take action by signing the petition and performing other actions you can find on the campaign page at https://animalequality.org/action/riu.

To stay up to date with this campaign and to continue helping animals through easy online actions, sign up to become an Animal Protector!