The foie gras industry is built on abuse. It’s time to stop producing and selling the product of animal torture.
February 17, 2022 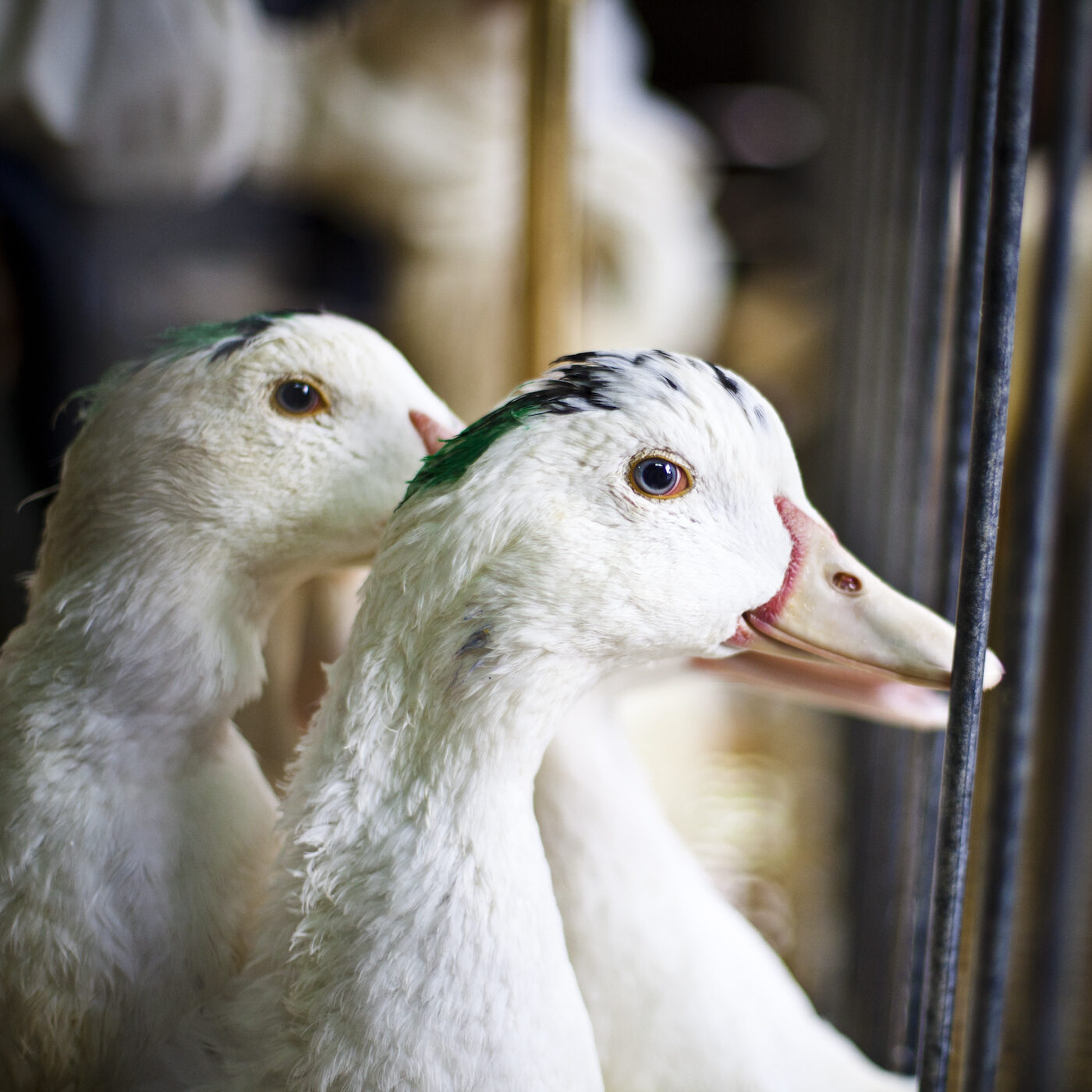 One of the most controversial practices in the animal agriculture industry is the force-feeding of ducks and geese to produce foie gras – a luxury food product served at some upscale dining establishments. “Foie gras” is French for “fatty liver” – and that’s exactly what it is: a fatty spread made from the diseased livers of violently force-fed ducks and geese. The practice of force-feeding to induce fatty liver disease is widely considered unacceptable, even among meat-eaters, yet it is perfectly legal in 49 out of 50 U.S. states. It’s time to end this practice by banning the production and sale of force-fed foie gras across the country.

Foie gras is considered a “delicacy,” yet its production is anything but delicate. Workers at foie gras operations thrust a 10- to 12-inch metal or plastic tube down each bird’s throat to rapidly deliver huge amounts of concentrated grain, fat, and compressed air into the bird’s stomach via a pneumatic or hydraulic pump. This process is repeated up to three times a day for several weeks, until the bird’s liver becomes diseased – often growing up to 10 times its normal size. This force-feeding process causes birds extreme pain and suffering, which continues for weeks on end until they are killed at around 15 weeks of age.

Force-fed ducks and geese have a mortality rate up to twenty times higher than non-force-fed birds. This is because force-feeding can have serious health consequences for the birds, including physical damage to the esophagus, difficulty breathing, mobility problems, aspiration, liver hemorrhage, and even cardiac or renal failure. These outcomes go against every principle of “humane” animal treatment.

Foie gras production poses a significant risk to public health as well. Because of the constant abuse they endure, ducks and geese on foie gras factory farms have weakened immune systems, making them especially susceptible to avian influenza (bird flu) infections. This is alarming in part because bird flu can spread to humans. In 2021 alone, France registered 475 outbreaks of avian influenza at poultry farms, the vast majority of these being foie gras operations. And as we saw with the Covid-19 virus, such zoonotic disease outbreaks can quickly spread into a global pandemic.

Everything about force-fed foie gras is unnecessary. It therefore has no place in a society that claims to condemn ‘unnecessary’ animal suffering. Cities and states across the U.S. should uphold this modest animal welfare standard by banning the sale of this entirely superfluous, luxury product within their borders.

Virtually all foie gras produced in the U.S. comes from a factory farm in upstate New York called Hudson Valley Foie Gras. Several undercover investigations between 2008 and 2014 show the systemic violence against birds in the company’s operations. Hudson Valley has also been cited for numerous violations of environmental laws. But these problems are not exclusive to the U.S. industry. Force-feeding foie gras operations abroad are even more cruel, as Animal Equality’s own investigations have revealed.

Because of the animal cruelty involved in the foie gras industry, the sale and/or production of foie gras has already been banned in New York City and the entire state of California, as well as in several countries, such as the UK, Germany, Italy, Norway, Poland, Turkey, and Israel. And after Animal Equality’s successful two-year campaign, India now prohibits foie gras imports, which means that it’s illegal to sell or buy it anywhere in the country.

You can help put an end to this injustice by asking your state and local lawmakers to ban the sale of foie gras and end the cruel practice of force-feeding.