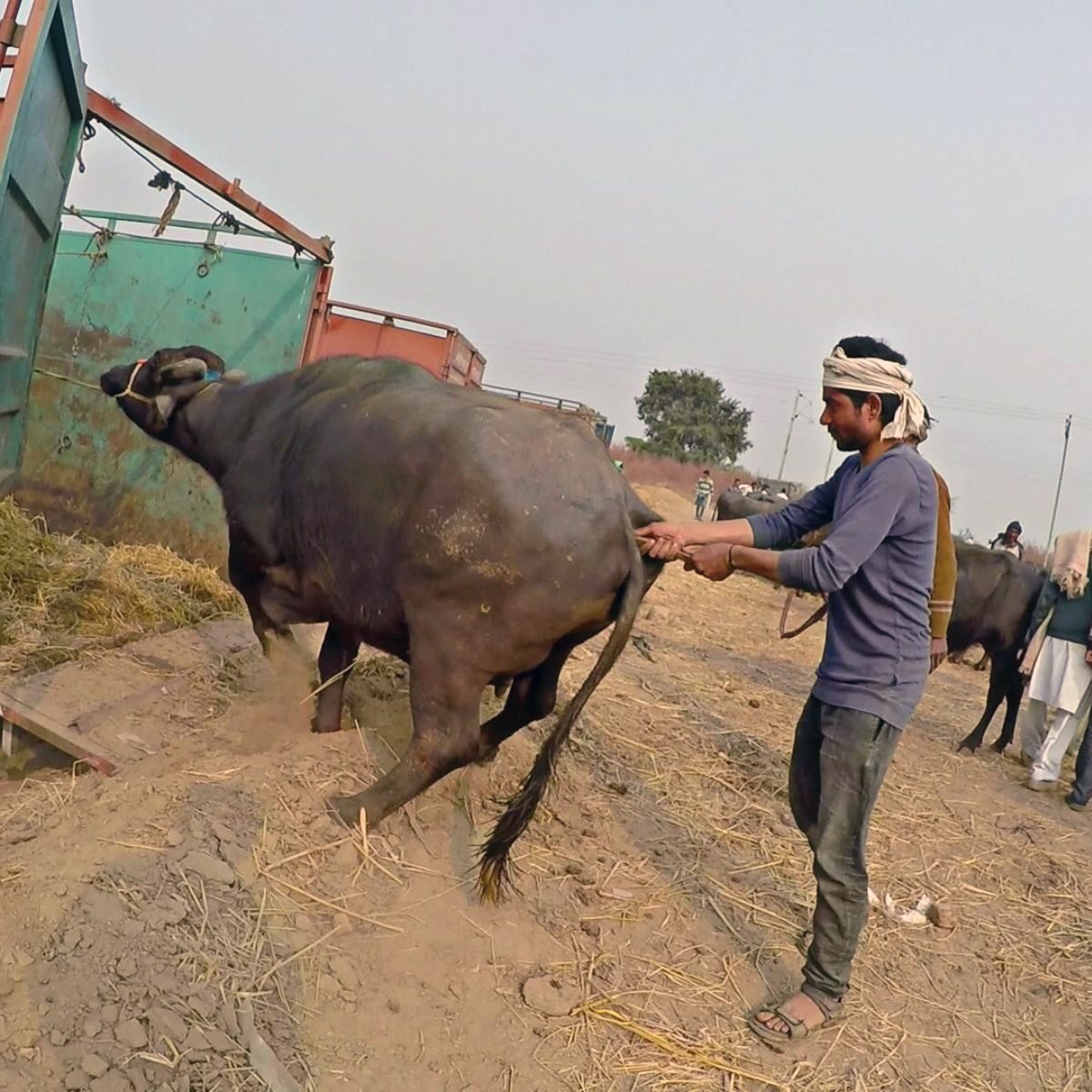 Animal Equality investigators in India have carried out an extensive investigation inside India’s dairy industry, including 107 dairy farms and 8 slaughterhouses. The investigation covered facilities in all regions of the country: Punjab and Haryana in the north, Uttar Pradesh in the east; Gujarat and Maharashtra in the west; Secunderabad in the center; Hyderabad, Karnataka, Tamil Nadu, and Kerala in the south. Animal Equality’s footage captured throughout these regions showed regular abuse throughout the lives of buffalos and cows in India’s dairy industry.

As mammals, cows and buffalos must first get pregnant to start producing milk to nourish their newborn offspring. According to India’s National Development Dairy Board, 80% of cows and buffalos are bred through artificial insemination. After 9 months of pregnancy in the case of cows –10 to 11 months with buffalos–, the farmers will immediately separate the newborn calves from their mothers to prevent them from drinking their milk.

Male calves are tied and starved to death or sold to slaughter, as they are seen as useless to the dairy industry. Animal Equality’s investigators documented how their bodies, and sometimes just their heads, are cut open, cleaned out, and filled with hay. Farmers believe that the smell of the corpses placed near their mothers increases their production of milk.

Despite the use of Oxytocin being banned in India, dairy farmers routinely inject cows and buffalos with it and other drugs to stimulate and increase milk production. This causes painful symptoms of labor and harms the animal’s reproductive system.

Buffalos at dairies are routinely and repeatedly hit with sticks, kicked, and punched. The animals are tied so tightly they can barely move and are on tethers so short they are forced to sit and sleep in their own feces. Images from this investigation also show routine abuse of workers pinching the animals’ sensitive genitals to make the animal submissive.

When the animals are no longer able to produce milk, they are sold to slaughter. For cows and buffalos, their bodies begin to deteriorate at 4-5 years old. The average lifespan for these animals outside of the industry is 15-20 years.

While being loaded onto trucks for transport, Animal Equality captured evidence of the extreme abuse workers caused to make the animals submissive. As footage shows, workers twist the animals’ tails, rub chili in their eyes and even shove sticks into the animals’ genitals, causing painful injuries.

As part of this investigation, Animal Equality inspected and filmed 8 slaughterhouses. Animals were thrown to the ground and had their throats sliced open. In one case, a cow was bludgeoned to death with a hammer – a practice known as ‘hammer slaughter,’ which is used in certain regions of India.

The skin of these animals is also used for leather. While being skinned, investigators documented some animals were still alive.

Many consumers don’t realize that animals used for dairy end up slaughtered for their meat when they are no longer seen as productive by the dairy industry. And up until the moment they are killed, these animals are used and abused throughout their entire lives. The best way we can help animals used for dairy is to make the switch to a plant-based lifestyle by choosing dairy- and meat-free alternatives.

Here is how you can prevent animal abuse:

From birth until death, cows and buffalos in the dairy industry are routinely abused before ultimately being slaughtered for their meat. Their lives are seen as a commodity for human consumption, and their suffering is ignored so the dairy industry can profit. The best way to condemn this cruelty and protect these animals is to switch to a plant-based lifestyle and choose dairy-free alternatives.

Get inspired by delicious plant-based recipes on LoveVeg.com!