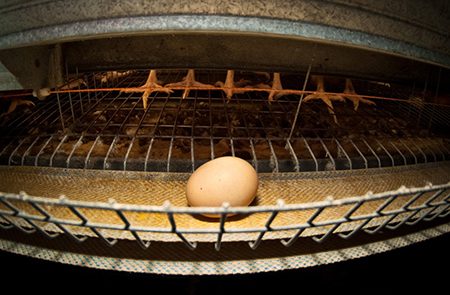 9 Images That Portray The Cruelty Of The Egg Industry

Someone at the supermarket grabs an egg carton, then goes to pay for it. This anonymous action is repeated millions of times a year. In Europe, each person consumes an average of 250 eggs per year, in Central America, 300 eggs are consumed, and in North America, the statistic is 240 eggs.

Eggs are omnipresent in diets; consumption figures are astronomical worldwide. Not only are they consumed in form of egg, but also as an ingredient in many other products. But what is the price paid for such amount of consumption? This is the part that the egg industry does not advertise, the one that’s not in the supermarket. This is the part that involves the egg-laying hens. Here is the truth that few know.

1. An industrial farm of egg-laying hens is not a place you would want to spend the day. 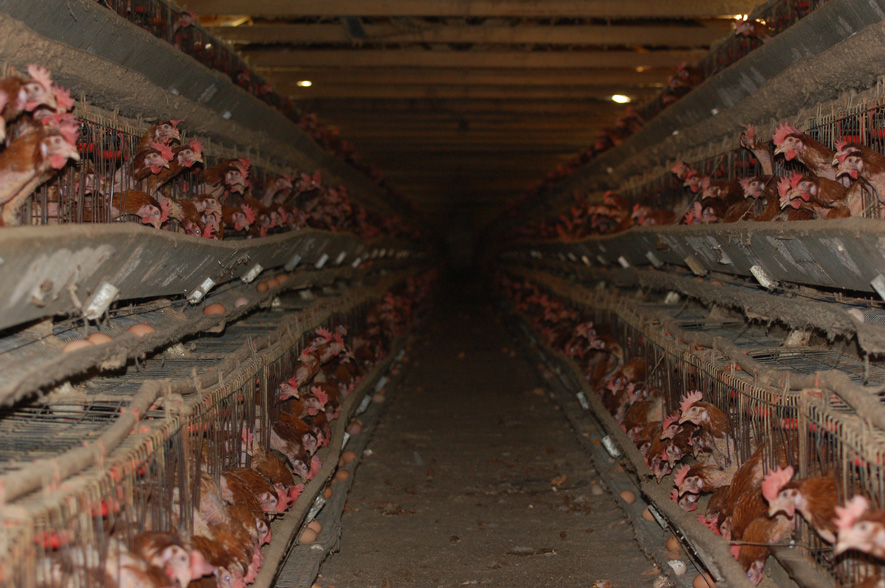 These farms are sordid and dark places. You should not expect this image to appear in advertisements for egg cartons. The truth is not publicity material.

2. Eggs are laid by hens. Ok, but then, what do they do with male chicks that will never lay eggs? 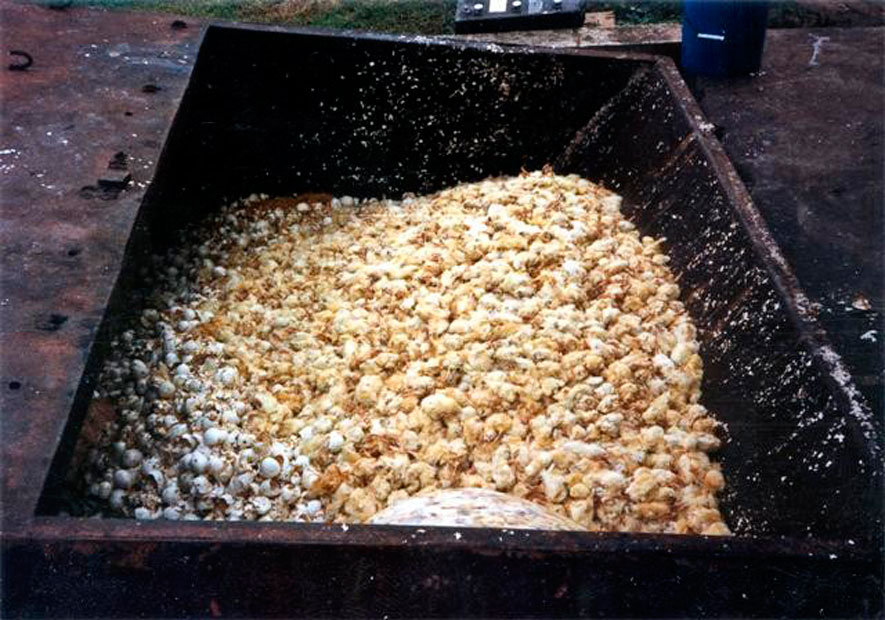 What happens with the male chicks in the egg industry? Well… They do not lay eggs (obviously) and they are not suitable for meat. Their destiny is to die within hours of birth thrown into garbage cans or grinded alive. 50% of chicks are male; this means that the egg industry inhumanly eliminates millions and millions of chicks at birth.

3. Most laying hens live in cages that they will be trampling around in for the rest of their lives.

A factory farm is a place designed to make money. Forget about animal welfare; what matters here is to keep producing. Everything is designed to cut costs. Who pays? Hens. Imagine living your whole life treading a grid of wires.

4. Caged and crammed for life. Up to seven hens can live in a tiny cage in which they don’t have enough space to even spread their wings. 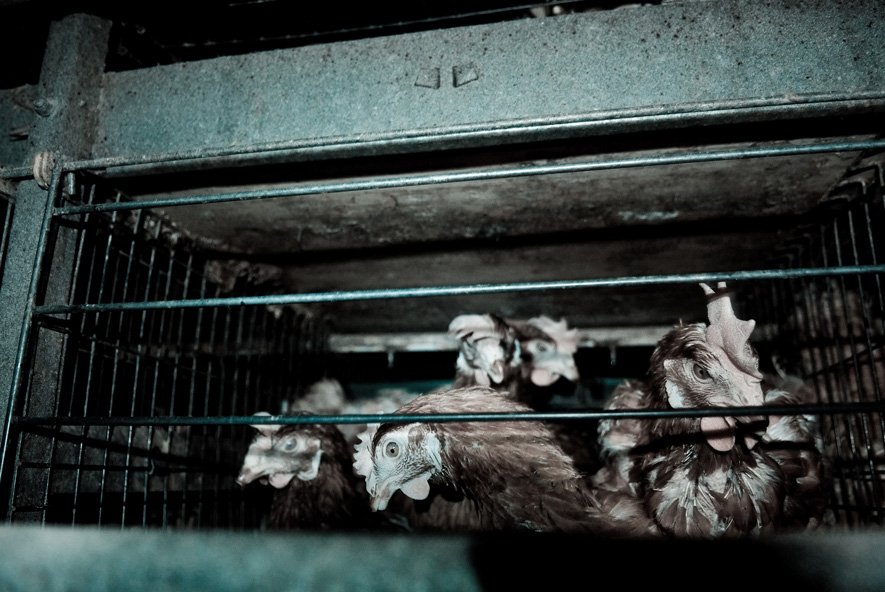 After they are born, their beaks are cut. Wonder why? Living life in extreme conditions is not easy; fights arise and they peck each other resulting in injuries. Beaks are trimmed to avoid hens from pecking each other until death. Cruel? Yes. Inhumane? Yes. It’s the price they pay for our high egg consumption.

5. Living with tens of thousands of others in a farm has its consequences. 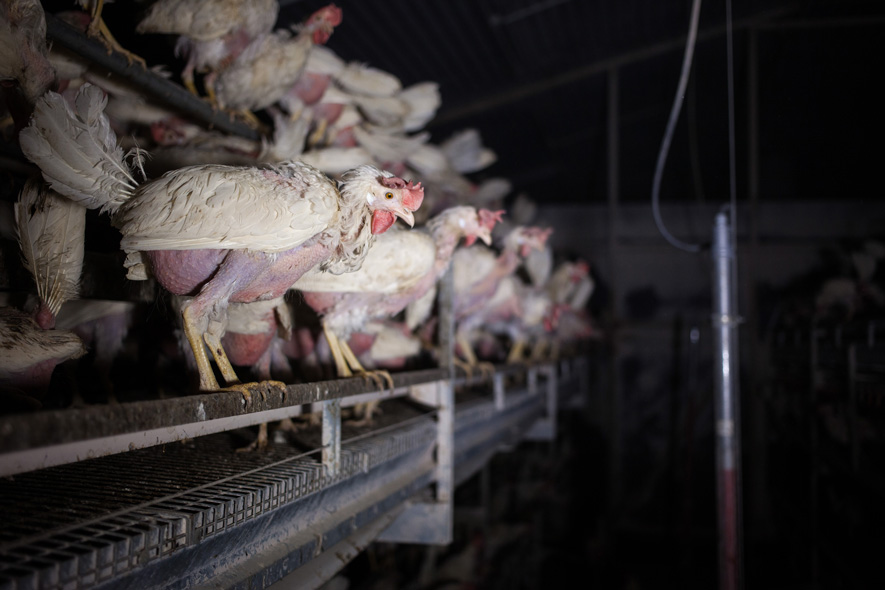 Even if they don’t live in cages, stress, continuous rubbing with industrial materials, disease…are all in abundance. They live to produce eggs and nothing else.  Their health is affected, and as a result, they lose some of their plumage, which makes them even more vulnerable.

6. You wouldn’t give factory farms an award for hygiene. 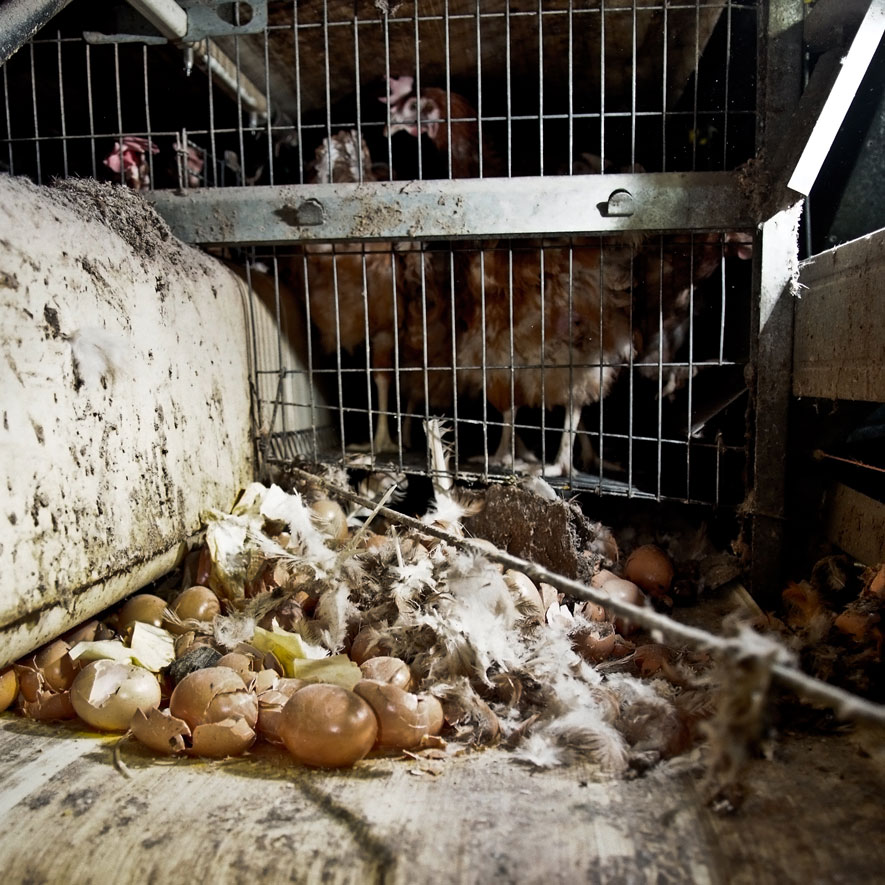 Imagine a hundred meter long warehouse. Its inner corridors and hallways are filled with cages installed on top of each other. All hen droppings from the ones above fall into the cage below. There are farms in which 100,000 or more hens live. Who will clean all the dirt that is produced? But this will not be seen in the egg boxes sold in your supermarket. 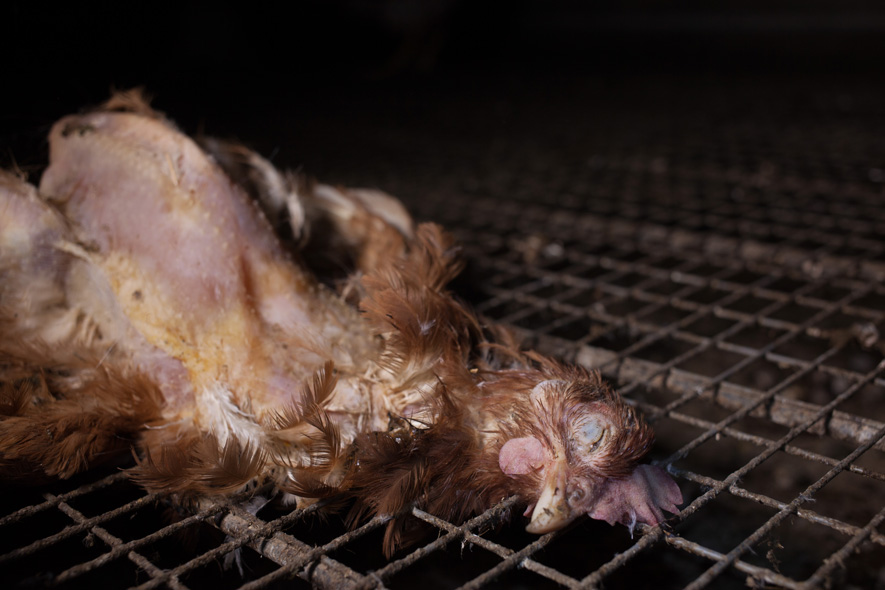 If you’ve read this far, you can see that life is not easy if you’re a laying hen. Not easy at all. In fact, many hens do not even make it to the slaughterhouse. The inhumane conditions are too much for the weaker birds, who die in their cages. The cage mates often have to live with the dead mate, sometimes they are removed, sometimes they’re not. Can you imagine? 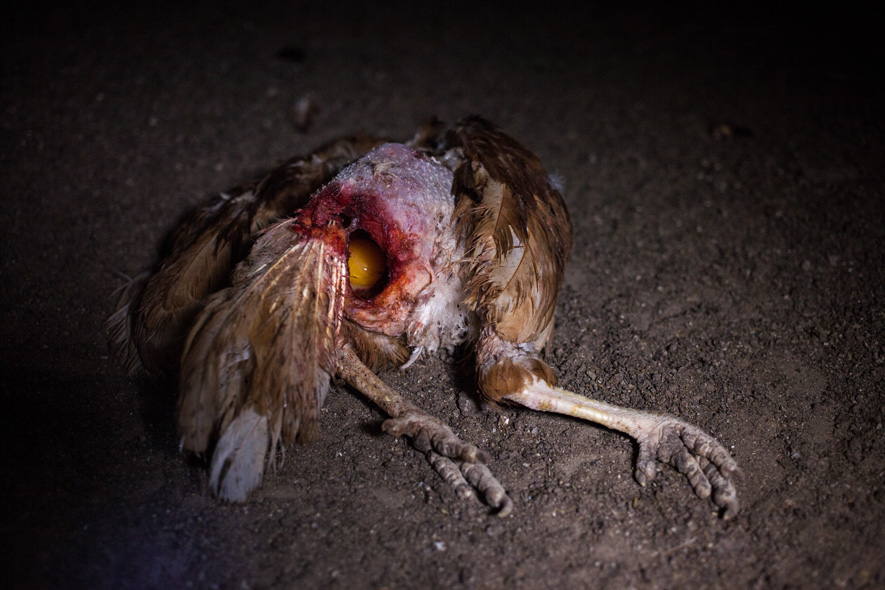 Hens in factory farms lay eggs at an unnatural pace. They even illuminate farms at night to keep them awake so they can continue laying eggs. This will affect their health. There are typical diseases, one being that eggs can fester inside them, and this causes tremendous suffering. They die without any veterinary care. In factory farms, there is no individual for veterinary care because it is too expensive.

9. The reward for a life of egg production: a dumpster. 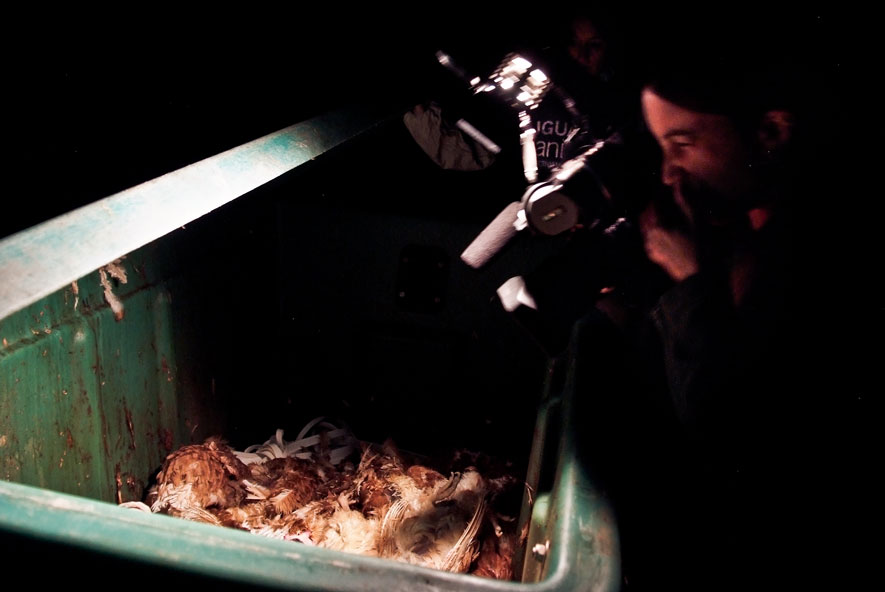 Hens that die in factory farms are thrown into giant trash cans. The worst of all this is that these hens are the luckiest. Their companions who are still alive will face more and more suffering. Something is terribly wrong when death is the best thing that can happen to you, but the egg industry is not here to make the world a better place. 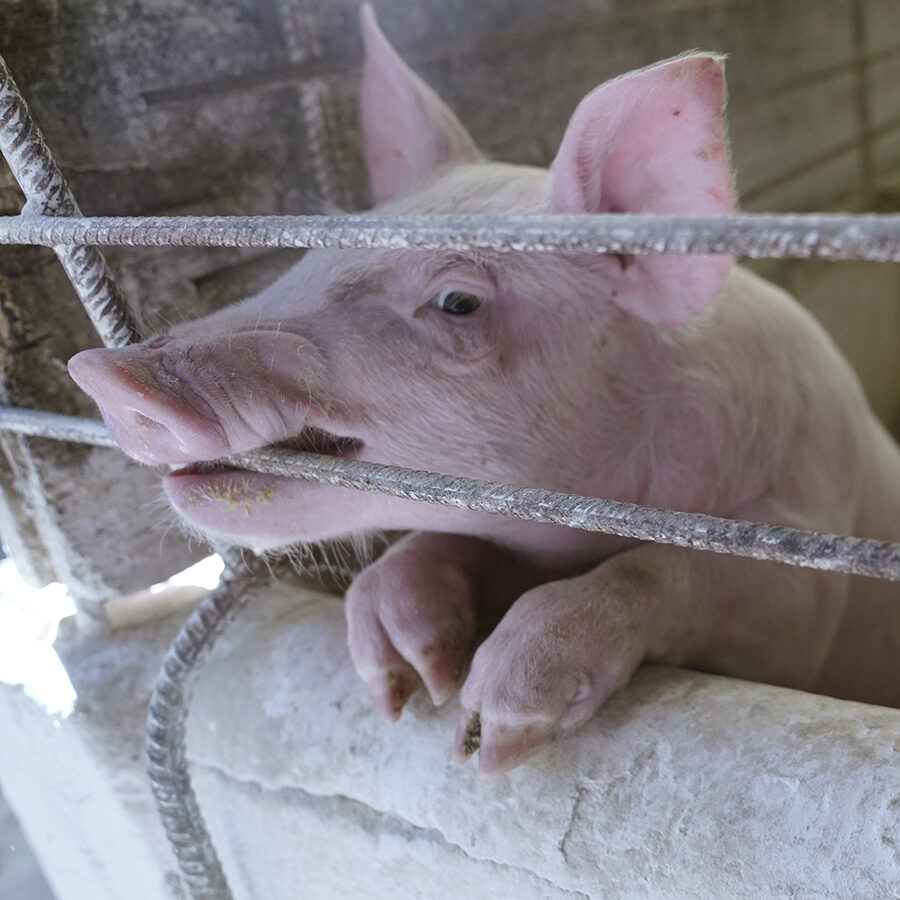 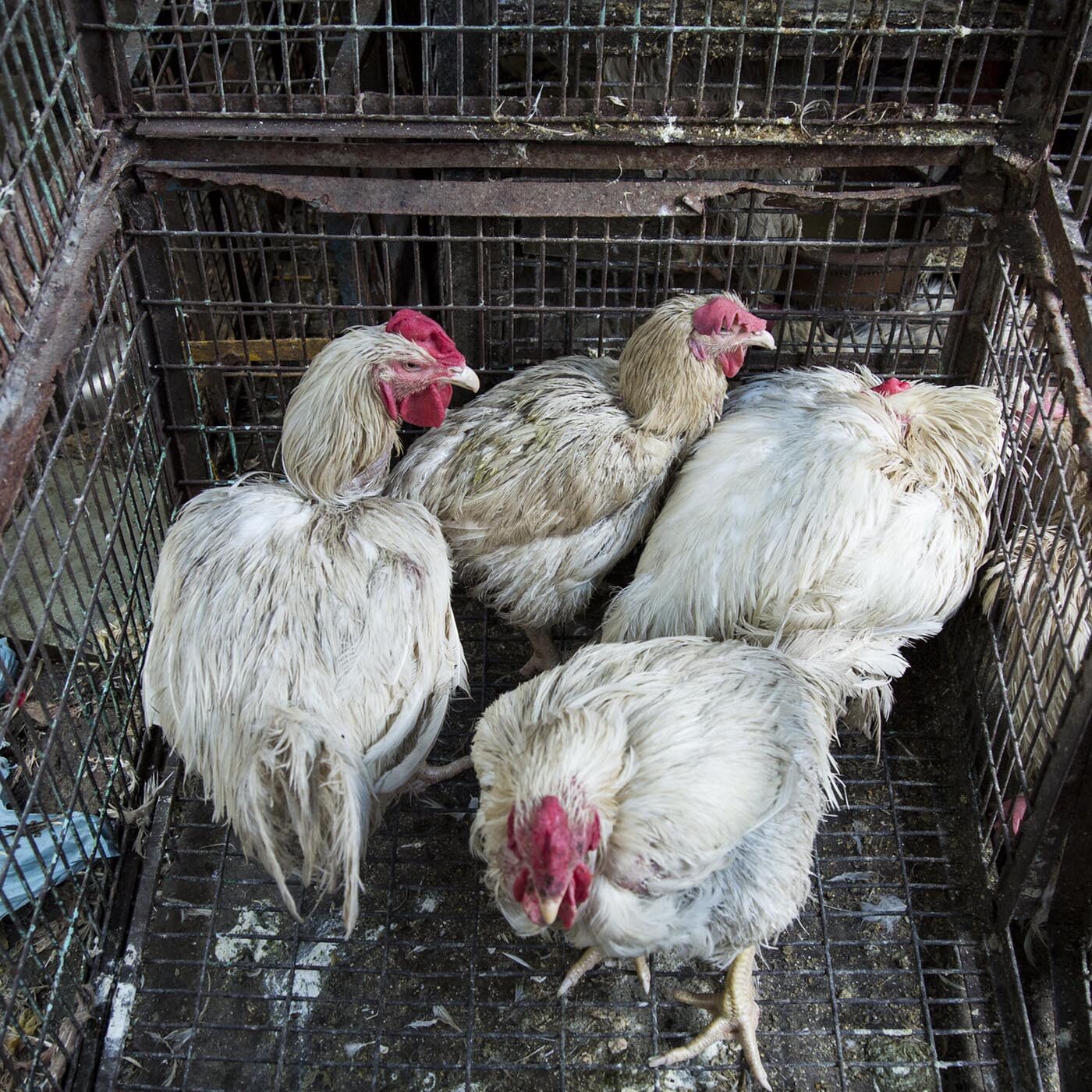