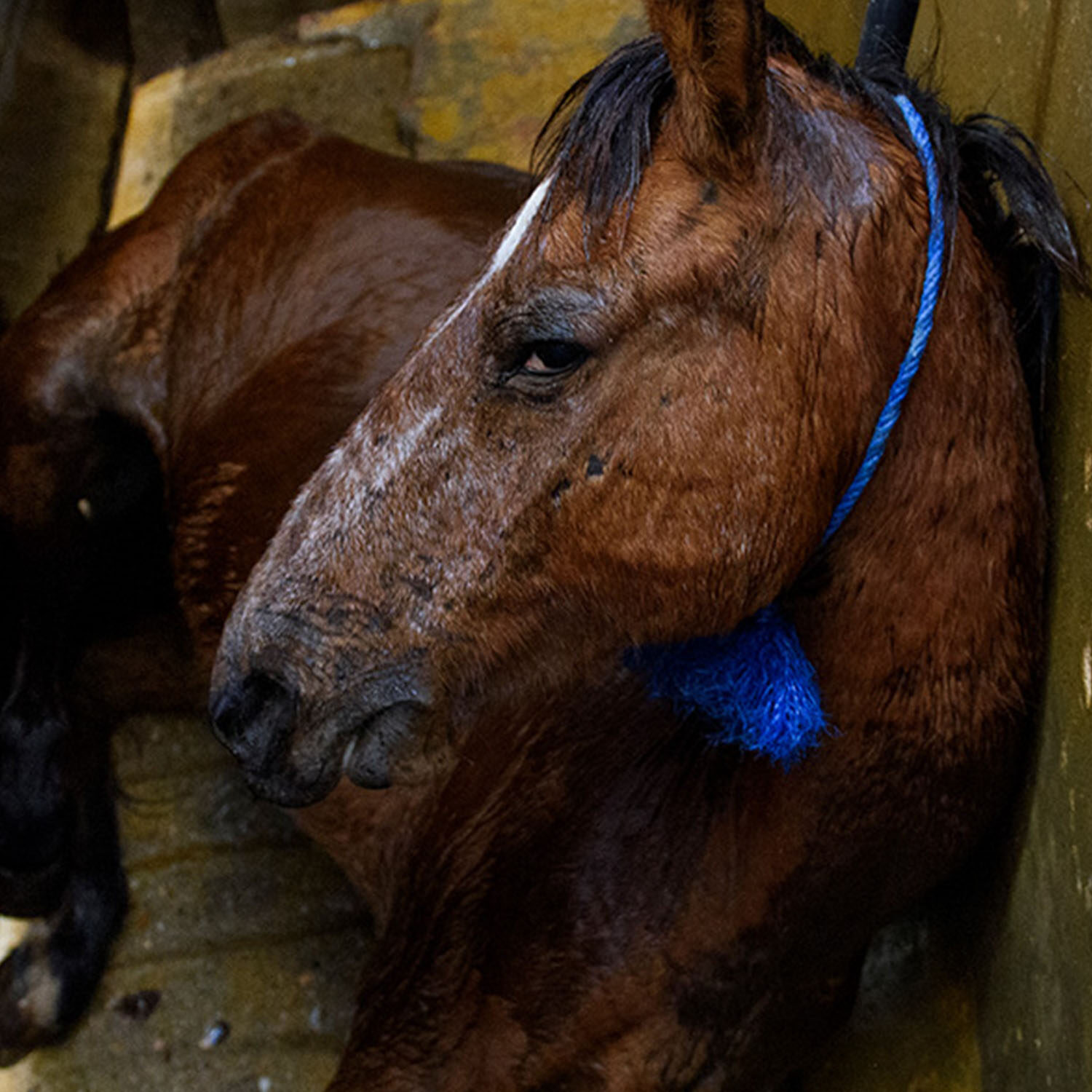 Claire Roberson Communications Manager
November 16, 2022
November 16th is Voices for Horses Day and we need your help in taking critical actions for American horses being killed for meat. This cruelty must end now!

Every year, over 30,000 horses are sent by the US to Mexico and Canada for slaughter. They are crammed onto transport trucks without food or water for over 24 hours. They arrive at the slaughterhouse scared and covered in injuries caused by stressed animals biting and kicking to show dominance. Once inside, they are often slaughtered while conscious due to ineffective stunning.

The majority of Americans disagree with the consumption of meat from horses. Yet there is currently no permanent federal ban on the exportation or slaughter of American horses.

Just a few weeks ago, Animal Equality released a campaign to end this hypocrisy and abuse. Over 80,000 supporters signed our international petition—with our US supporters asking the Government to place a permanent ban on the transportation and slaughter of American horses.

In just a few short weeks, the US Congress will be presented with a year-end package that could include a ban on the slaughter of American horses. The time is now to take immediate and critical action to demand Congress end this cruelty for good!

Here are three ways you can support a ban to protect these sensitive animals.

Be a part of the public pressure aimed at Speaker Pelosi, Representative McCarthy, Senator McConnell and Senator Schumer—the leaders of the US House & Senate. Demand they place a permanent federal ban on the slaughter of horses from the US.

The tweet reads: 👋 @SenSchumer @SpeakerPelosi @McConnellPress @GOPLeader, American horses are being slaughtered across our borders every day. Please pass a permanent ban on horse slaughter this #Congress to end the cruel and unnecessary deaths of thousands of American horses.

2. Call Your US Representative

Once connected, you can simply say: “Hello, my name is [insert your first and last name]. I am a constituent. I am calling today to urge Representative [insert Representative’s last name] to pass a federal ban on horse slaughter immediately. Thank you for your time.”

The slaughter of horses for their meat is a cruel practice and one that animal protection organizations have been denouncing for decades.

These sensitive and intelligent animals are considered companion animals by many. Yet they are treated as commodities in our global trade. It’s time for this hypocrisy to end. Join the voices of thousands of supporters around the world to help ban the killing of horses for human consumption.

Around 25 million animals, like cows, pigs and chickens, are killed for their meat inside our borders every day. From the moment they are born, these animals suffer on factory farms where they are abused, mutilated, forced to live in extreme confinement inside windowless facilities and ultimately slaughtered in—oftentimes—painful ways.

No living, breathing being deserves this fate, but you can do your part to not contribute to this exploitation. By choosing plant-based alternatives, you are helping fight against an industry that only values profits and not the wellbeing of animals.