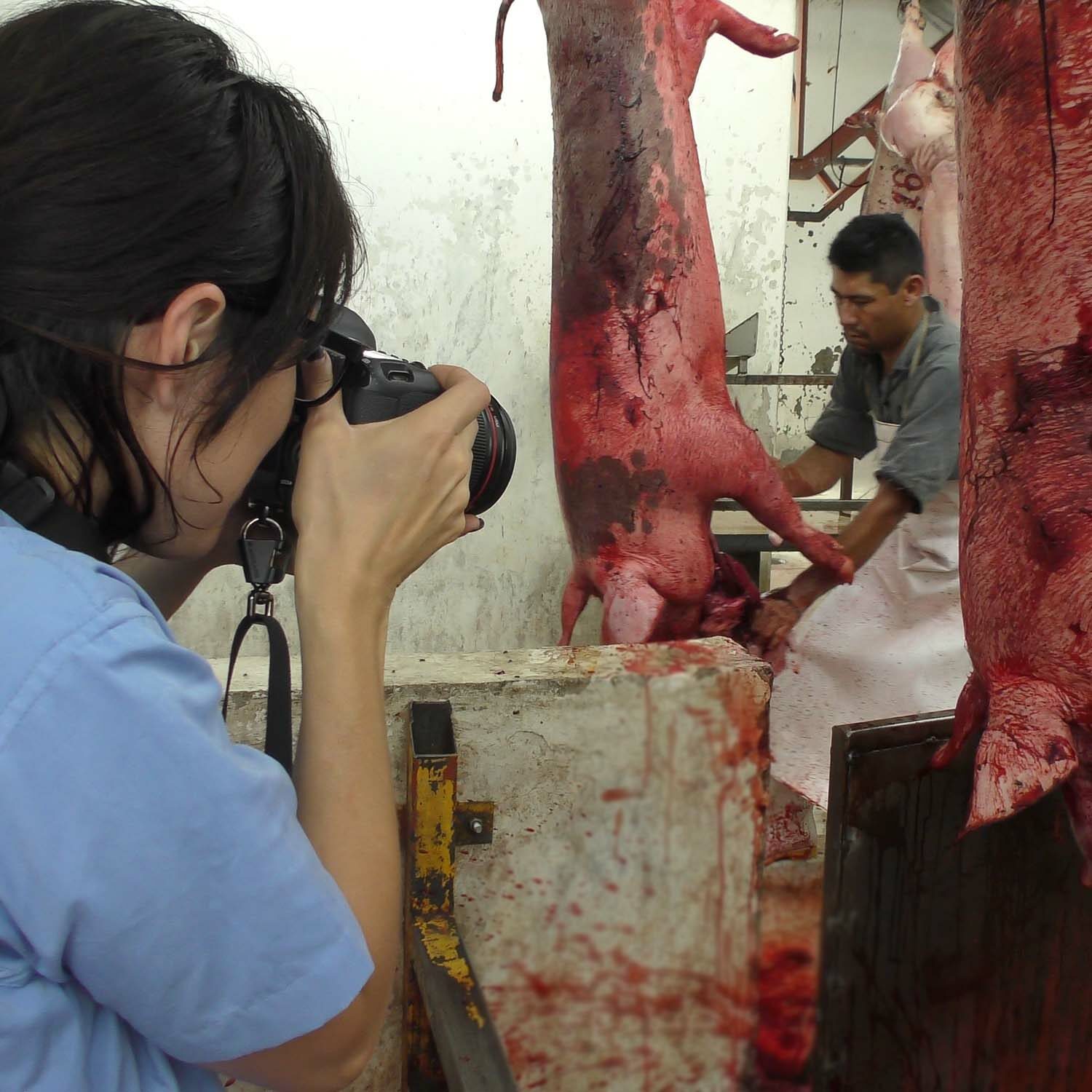 Animal Equality Was There During Their Final Moments

Claire Roberson Communications Manager
October 20, 2022
From Animal Equality’s beginnings, we have been dedicated to exposing the suffering of animals inside factory farms through undercover investigations. The meat industry tries to hide animal abuse and cruelty happening on its farms and inside its slaughterhouses. These investigations are the only way to prove what happens behind their walls.

Animal Equality began investigating in 2006 when co-founders Sharon Núñez, Jose Valle, and Javier Moreno were met by cynics during their protests in Spain. Their opposers didn’t want to believe the cruelty they described was happening inside slaughterhouses. So the team set out with a camera to show them the truth.

As an organization, Animal Equality has since conducted over 820 investigations–128 of which were inside slaughterhouses across ten countries. This extensive footage shows the slaughter of many animals–pigs, cows, chickens, lambs, goats, fish, horses, rabbits, ducks, buffalo, turkeys, dogs and doves–most of which suffer significantly in their final moments.

The images captured at the time of slaughter are incredibly violent. Animals watch in fear as their companions are killed right before them. Fully conscious animals have their throats slit. Workers hit, kick and yell at animals just moments before slaughter.

This animal abuse and suffering are systemic, as shown repeatedly during undercover investigations. But the footage serves as evidence to start changing this system. It is used to educate the public and inspire people to reject this suffering by choosing plant-based, cruelty-free options. And with these images, we can collaborate with other notable organizations, animal welfare experts, and government officials to create stricter animal protection laws and policies.

Creating Protections for Animals During Slaughter

This past July, Animal Equality released the most extensive investigation inside slaughterhouses completed by an organization. The footage was captured over six years inside 34 slaughterhouses across 13 states in Mexico. It documented the emotional and physical suffering of cows, pigs, and sheep during their final moments.

The images were crucial in advancing the legislative efforts in Nuevo León, Mexico earlier this year. In June, the Hidalgo Congress unanimously approved an initiative promoted by Animal Equality. Deputy Elvia Sierra Vite worked with us to present the initiative. Hidalgo is now the first state in Mexico to recognize farmed animals in law. Cruelty to farmed animals is now punishable with prison sentences of up to four years. Nearly 50 million animals used for food are now more protected from abuse.

Animal Equality also introduced initiatives to recognize the sentience of animals in Mexico’s Constitution and the state Constitution of Nuevo León in Mexico. These bills are being supported by members of Congress and the Citizen Movement Party Together, who saw slaughterhouse investigation footage and couldn’t deny the need for progress.

In Brazil, an investigation was released inside three slaughterhouses to combat a proposed bill that would give these facilities the authority to regulate themselves.

As the footage shows:

The images were proof of the animal abuse and suffering that was already happening, and just how bad it could be without inspections. Animal Equality supporters and the public were urged to help stop the proposed initiative that was already awaiting certain approval by Brazil’s President Bolsonaro. The mobilization resulted in 16 senators presenting a request for the bill to be voted on in the plenary session. These efforts helped pause the vote.

With this additional time, we organized a public hearing at the State Assembly with the support of State Representative Carlos Giannazi. As a result of this public hearing, Representative Giannazi released an official letter to members of the Senate pointing out the main topics of the public hearing to create more debate and resistance to the bill.

The footage captured inside slaughterhouses is not only proof of the need for change in legal protections. It also serves as evidence to hold accountable those who violate animal protection laws by abusing animals–even up until the animal’s last breath.

An investigation released in June 2021 by Animal Equality at Zema Srl slaughterhouse in Italy shows the owner and workers mistreating pigs destined for slaughter.

Animal Equality filed a complaint, supported by this footage, with the Public Prosecutor’s Office against the slaughterhouse. The owner was charged with the mistreatment of animals in May 2022.

Of all the places where animal abuse occurs, slaughterhouses are the ones where animals are subjected to the most brutal cruelties. Exposing the abuse in their final moments is crucial to creating stronger protections for farmed animals. This is why investigations are at the core of what we do. And this is why we will be there in their final moments to show the world how they suffer for their meat needs to end.

You can help end their suffering once and for all! Sign our End Factory Farming petition to lend your voice to the 266 land animals killed for their meat every second:

While investigations and creating new laws to protect animals are crucial, the best way to protect them is to leave them off your plate. That’s why we urge you to try a plant-based diet and encourage your family and friends to enjoy a more compassionate way of eating.