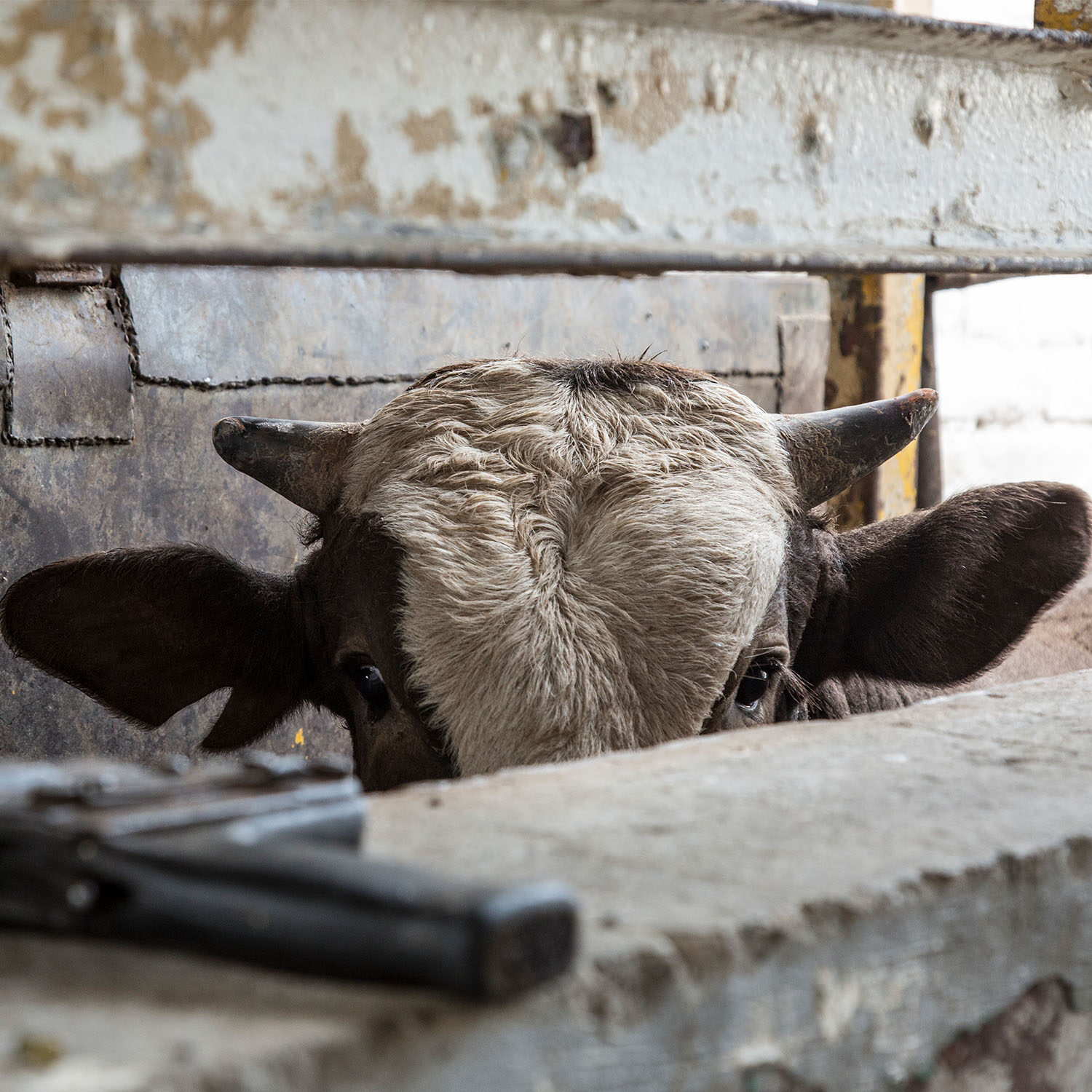 Can Slaughter Truly Be Humane?

Claire Roberson Communications Manager
September 19, 2022
Happy cows in lush fields, pigs playing in the mud, and chickens roaming freely under the sun on a green field...The meat industry projects an image of its business that is far from reality. At the time of slaughter, we are told these animals are killed ‘humanely’ with care and without pain. But farmed animals suffer greatly throughout their lives - while they are raised on farms, transported to slaughterhouses, and then ultimately killed for their meat.

Happy cows in lush fields, pigs playing in the mud, and chickens roaming freely under the sun on a green field…The meat industry projects an image of its business that is far from reality. At the time of slaughter, we are told these animals are killed ‘humanely’ with care and without pain. But farmed animals suffer greatly throughout their lives – while they are raised on farms, transported to slaughterhouses, and then ultimately killed for their meat.

As defined by the American Veterinary Medical Association, ‘humane slaughter’ refers to methods designed “to bring about the rapid loss of consciousness and, ultimately, a complete loss of brain function in animals destined for use as food. This means minimizing (and, where possible, eliminating) anxiety, pain, and distress…”1

But cows, pigs, and chickens are among the most abused animals. In the United States alone, approximately 427 animals, including fish, are killed every second in slaughterhouses – over 13 billion every year.2 And their death is anything but ‘humane.’

Inside the slaughterhouse, animals are forced into pens. They have just endured a long journey on a cramped transport truck without food or water. While they wait in the pens, the pigs can hear the screams of those being slaughtered. They tremble as they wait for their turn and look for a way to escape. And when it’s their turn, they fight back, resist leaving the pen or try to run.

A number of Animal Equality investigations have also exposed intentional animal abuse in these final moments of the animals’ lives. Animal Equality released the most extensive investigation inside Mexican slaughterhouses after filming in 34 facilities.3 Investigators found workers beating and kicking animals and shocking them with electrical devices. Pigs, cows, and sheep were often killed while fully conscious.

In 2021, we documented pigs at an Italian slaughterhouse being forced out of trucks into a slaughterhouse. Workers beat the pigs with sticks, shocked them with electrified rods, and kicked them.4

In one case, a young piglet was repeatedly hit by a worker and began to spasm on the ground. The worker then took him by the leg and threw him against a concrete wall. The piglet’s body was thrown away. All of this happened in front of one of the owners of the slaughterhouse.

Personal observations indicate that severe rough handling, abuse, and neglect on farms, ranches, markets, and feedlots have remained at a steady 10% – 15% of operations for the last ten years over the entire United States.”

The Humane Methods of Slaughter Act passed in 1958 requires slaughterers to stun some animals before they are slaughtered.6

-Humane Methods of Slaughter Act of 1958

The Act declares that its aim is to “prevent needless suffering” by inducing the loss of consciousness in animals before being killed.

There are three common methods of stunning typically used, depending on the species and characteristics of the facility: mechanical, electrical, and gas.

One of the mechanical methods used most often implies using a captive-bolt gun that fires a metal bolt into the front cortex of the animal’s brain. This method is typically used on larger animals like cows and sheep.

A study done inside a Swedish slaughterhouse by the Swedish University of Agricultural Sciences revealed that 13.6% of the observed bulls remained conscious despite being shot accurately. In one instance, a bull was shot in the head five times before being deemed ‘stunned.’7

Of the 13 billion animals killed every year in US slaughterhouses, over 70% of them –9.3 billion– are chickens not covered by the Humane Methods of Slaughter Act.2

After they arrive at the slaughterhouse, chickens are hung upside down by their feet from shackles on a moving conveyor belt. They are then carried to a bath where their heads are dunked into electrified water. Often, the electric current is not strong enough to render them unconscious. Some other times, they lift their heads or, due to size differences, they don’t even reach the water to be stunned.  By the time they are carried to the metal blade for slaughter, many are fully conscious while their throats are slit.

According to a HuffPost article, scientists say “an untold number of the chickens – hundreds of millions of them and potentially many more –  that we eat likely experience intense suffering when they are slaughtered.”8

Controlled Atmosphere Stunning (CAS) is a stunning method recommended to induce unconsciousness in chickens and turkeys. This method reduces stress as the chickens are no longer hung by shackles while conscious. Instead, the birds are introduced in a chamber while they remain in the transportation crates. The chamber then progressively replaces the oxygen in the air with a nonpoisonous gas until the animals lose consciousness. This method eliminates the handling of live birds by workers, so the animals are less likely to be abused.

In 2020, Animal Equality investigated a U.S. catfish slaughterhouse, Simmons Farmed Raised Catfish, in Mississippi. We documented that the electrocution stunning methods continuously failed  despite claims by the company that fish are “processed within 30 minutes” and in a “swift [and] sterile manner.”10

Investigation footage shows fish at various stages of the slaughter process left on conveyor belts for up to an hour. They are seen gasping for air and slowly suffocating. The fish are electrocuted by metal prongs before slaughter. But because of the ineffectiveness of this method and the time it takes for them to reach the beheading machine, many are awake while killed. Despite popular belief, studies continue to show fish feel and experience pain.

Gas stunning is the method typically used on pigs, where the animals are loaded into gas chambers and exposed to high levels of carbon dioxide. In many cases, pigs do not become unconscious immediately and the high levels of gas have been shown to cause great pain and distress as they gasp for air, squeal and struggle to escape for up to a minute before losing consciousness.

How You Can Help Stop Their Suffering

Ultimately, slaughtering animals is violent and never cruelty-free. The most humane thing we can do for these animals is to keep them off of our plates. When we choose plant-based options, we are denouncing the suffering of animals in slaughterhouses and on factory farms. With recipes from LoveVeg.com and increasingly accessible meat and dairy alternatives, helping animals with our food choices has never been easier.

You can also help us end these cruel methods once and for all. By signing Animal Equality’s End Factory Farming petition, you are lending your voice against these practices and the suffering they cause to animals.

1AVMA Guidelines for the Humane Slaughter of Animals (2016 Edition): https://www.avma.org/sites/default/files/resources/Humane-Slaughter-Guidelines.pdf

5Commentary: Behavior of Slaughter Plant and Auction Employees toward the Animals: https://www.researchgate.net/publication/242478979_Commentary_Behavior_of_Slaughter_Plant_and_Auction_Employees_toward_the_Animals