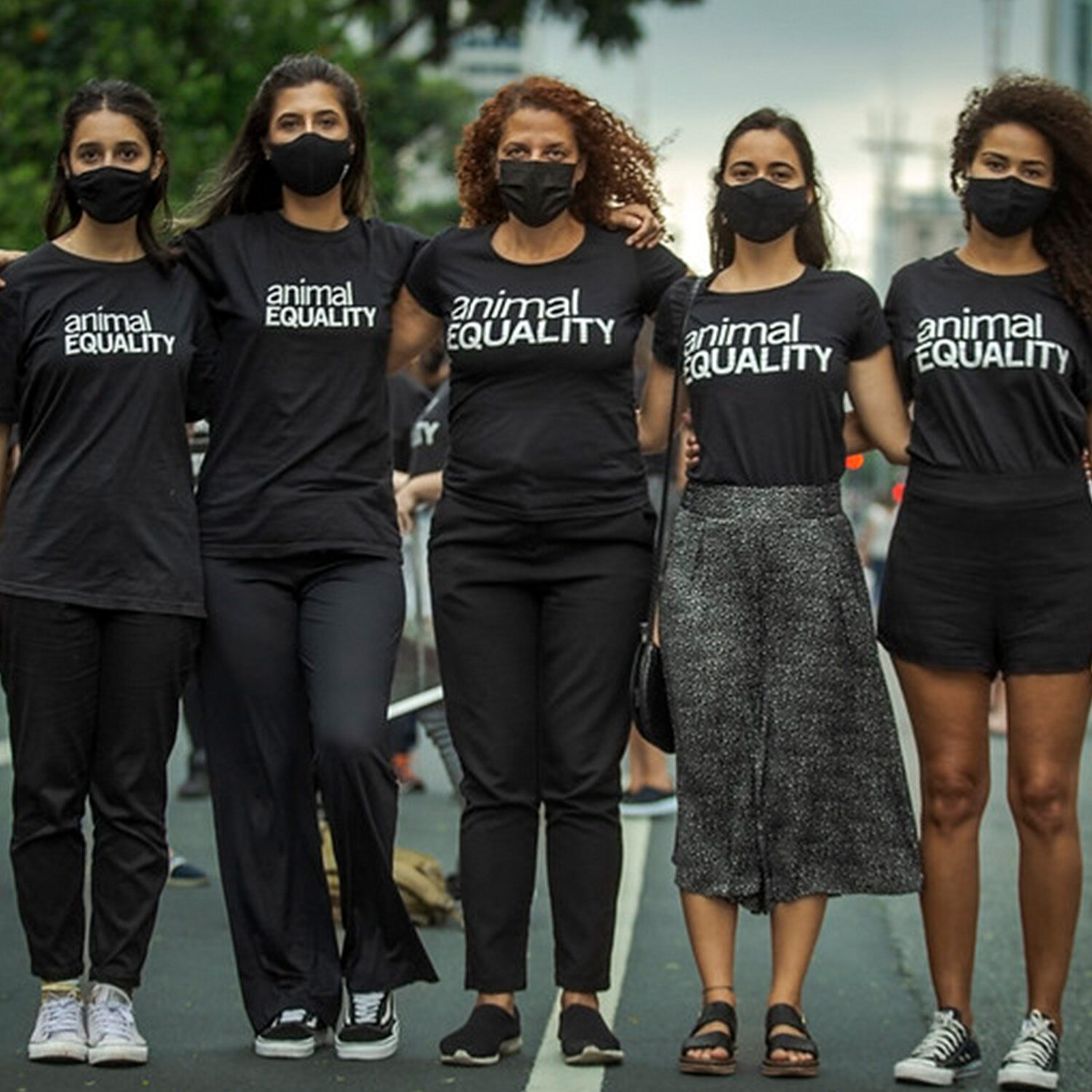 In June, Brazilian Senators fast-tracked a bill to remove government oversight inside slaughterhouses. The initiative – dubbed the ‘Self-Control’ Bill – will allow the meat industry to conduct its own animal welfare inspections. Since its introduction, Animal Equality’s global team has been working to show the risks of allowing this bill to pass.

Joining Forces Against The Self-Control Bill

More than 40 entities came together to oppose the Self-Control Bill. Animal Equality joined these efforts alongside other animal and environmental protection organizations and associations for consumer rights, public health protection, and government inspectors.

Members of Brazil’s Association of Inspectors who oppose this bill have voiced their concern. They warn this initiative could bring immense damage to animals, the health of the population, and the environment.

The Ecologist, a British environmental magazine, also reports that these members admit the bill “poses a conflict of interest, as private companies will not have the resources or power to counterbalance the interests of the large food businesses.”1

As part of Animal Equality’s campaign, an investigation was released inside three self-regulated slaughterhouses in Brazil.2 These facilities are left to their own authority to conduct animal welfare and health inspections without government oversight.

The bill is moving at such speed, it’s clearly being fast-tracked. This bill is a blatant attack on the protections currently in place to protect animal welfare, our environment, and human health. We will not sit back and watch as our laws are loosened. The only ones who would win are the animal agriculture industry, who will be left to self-police.

The Global Impact of the Self-Control Bill

As the world’s largest exporter of meat from cows, Brazil will not be the only country affected by this bill. In the United States, one in every ten imports of meat from cows comes from Brazil, while the UK imports nearly 24,000 tonnes.3 This raises concerns internationally about the welfare of the animals and the health and safety of consumers.

The UK imports tens of thousands of tonnes of animal products from Brazil every year and with such a disturbing lack of oversight, there’s no way of knowing how those animals lived and died. The suffering they endured will forever be kept out of sight. Ultimately, if governments won’t protect them, we as consumers can, by leaving animals off of our plates.

After releasing news of the Self-Control Bill internationally, Animal Equality garnered support from people around the world. Supporters and volunteers opposing the bill took to social media to debate the initiative and ask senators to vote against the bill. And news of the fight against the proposed law was recognized in the media.1

Thanks to the international pressure of Animal Equality, our compassionate supporters, and other animal protection organizations, the bill’s approval has been postponed. Animal Equality, with the support of State Representative Carlos Giannazi, has organized an urgent public hearing to deepen the debate on the Self-Control Bill. The event will take place on Thursday, September 15th.

Among those participating in this discussion is Brazil’s Association of Inspectors (ANFFA Sindical), Mercy for Animals, and various organizations in animal protection, the environment, workers’ rights, and public health.

Animal Equality will never stop investigating and documenting the suffering of farmed animals inside slaughterhouses across the globe. And we will fight against legislation that gives the industry that abuses and exploits these animals the power to hide behind self-inspection.

Farmed animals will continue to suffer for meat, dairy, and eggs as long as there is a demand for animal products. By switching to a plant-based diet, you are helping decrease that demand and making the choice not to contribute to the abuses of animals on factory farms. Visit LoveVeg.com for compassionate alternatives to animal products and cruelty-free, plant-based recipes.