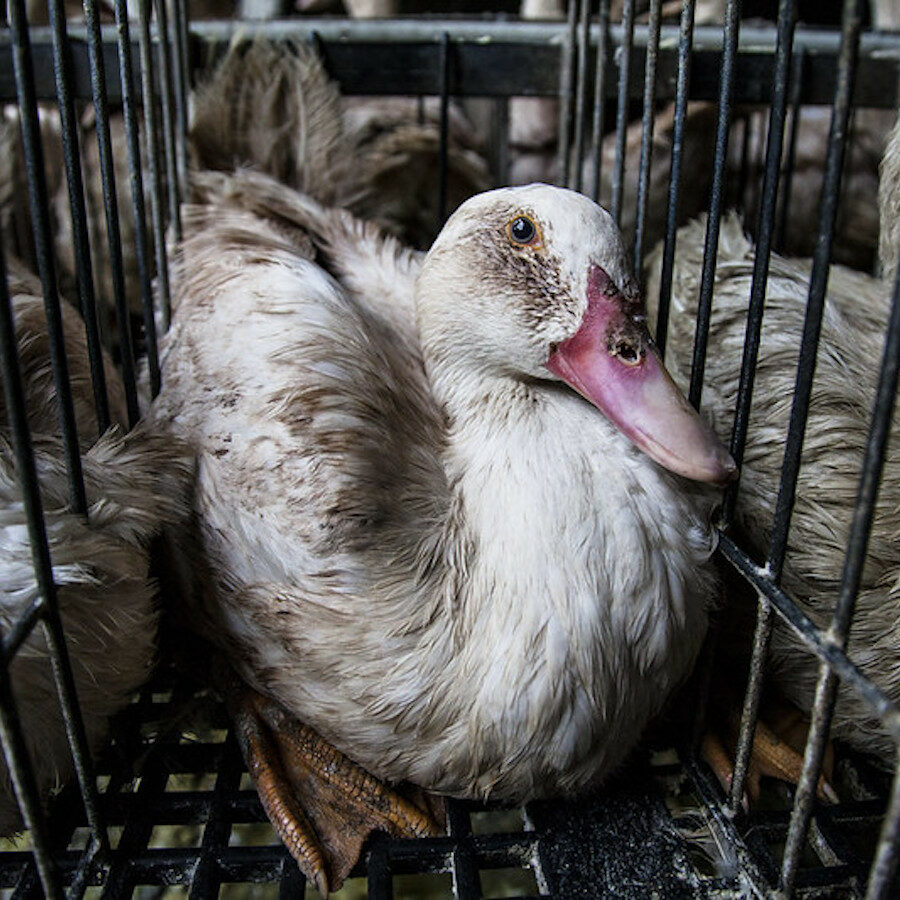 Our Fight to Ban Force-Feeding Worldwide

Dane Charbeneau
February 21, 2022
Here are some of the key international successes you’ve helped us achieve in the fight to end force-feeding all over the world.

Animal Equality has worked for a decade to stop the harmful practice of force-feeding birds to make foie gras. We’ve conducted investigations on farms, knocked on politicians’ doors, and used grassroots and legal advocacy to score crucial international victories for force-fed ducks and geese.

Birds on foie gras farms are force-fed excessive amounts of fatty food that causes their livers to become diseased and enlarge up to ten times the normal size. Ducks and geese endure this painful, frightening, and cruel process three times daily for weeks. These sick and traumatized birds are then slaughtered so their livers can be made into foie gras, a high-priced so-called “delicacy” sold in upscale markets and expensive restaurants.

In 2012, our investigators went into four French and five Spanish foie gras farms, where we exposed the cruelty of force-feeding. Over the years, we’ve collected many hours of video and audio footage and over 500 photographs that documented the abuses and welfare violations on farms.

In one of our investigations, we uncovered cruelty and suffering in ducks at the Spanish farm Caracierzos, which supplied well-known companies Collverd and Martiko. The footage Animal Equality investigators obtained revealed ducks languishing with broken beaks and covered with blood from being force-fed. Birds were also documented with painful eye infections and breathing difficulties.

We’ve used footage and photographs from our investigations to advocate for bans on foie gras production, sale, and import all over Europe. In Spain, we collected over 59,000 signatures supporting a ban on force-feeding. Our investigations in France and Spain resulted in disciplinary actions taken against the owner of a foie gras farm that was force-feeding ducks, and the owner of the renowned restaurant Mugaritz.

We launched a campaign in Italy directed at stores selling foie gras. As a result of the upsetting cruelty to ducks and geese shown in our investigations, one of Italy’s largest supermarket chains, The COOP, agreed to stop selling foie gras.

When we found out that India was importing foie gras from one of the well-known distributors we had exposed in our European investigations, we launched a campaign to prohibit the product there. We used footage and images from our investigations in Spain and France to ask government officials to stop buying foie gras.

They were so convinced of the cruelty of force-feeding that, in 2014, India became the first country to institute a nationwide ban on the sale and import of products made from force-fed birds. This groundbreaking move spared immense numbers of ducks and geese from the pain of force-feeding.

Ending force-feeding in the UK

Foie gras is imported and sold all over the world, and that’s why it is important that countries ban the import and sale of these products. The cruelty of force-feeding is undeniable, and banning the practice itself is not enough if profits can still be made from sales of imports.

In the UK, force-feeding birds to produce foie gras is already illegal, but supermarkets and restaurants can still import and sell foie gras. Britain imports nearly 220 tons of foie gras into the country each year–causing pain and suffering in thousands of birds. Animal Equality has been pushing the UK government to ban the importation of foie gras since 2017.

Last year, we sent a letter to the UK government asking for a definitive ban on foie gras sale and import. Accompanied by British actor Peter Egan, celebrity chef Alexis Gaulthier, and many supporters, Animal Equality’s UK director delivered over 250,000 signatures from British citizens in favor of an import ban directly to the British Prime Minister’s residence.

DEFRA, the department that oversees food production and standards in the UK, has already promised to support a foie gras prohibition. We’ll continue pushing for a definitive ban on foie gras products until the UK parliament votes on this issue.

Animal Equality has achieved some groundbreaking wins for force-fed birds over the years, but the fight is far from over. We will continue to advocate internationally for ducks and geese, until no more birds have to suffer from the agony of force-feeding.

Millions of birds endure the painful and cruel process of force-feeding to create an exorbitant luxury product that no one needs. You can help these birds by supporting our campaigns in the US and internationally, signing our petition to ban foie gras in the US, and sharing our work widely.

One of the best ways to reduce animal suffering is by leaving animals off of your plate and choosing plant-based alternatives whenever possible. By taking this simple action, you can spare the lives of many animals.