Our legal team made tremendous progress engaging in proactive legal initiatives including the launch of our Freedom of Information Act (FOIA) Program and supported legislation in Michigan that will ban the production and sale of eggs from hens confined in cages. More information on these and other accomplishments are outlined below, along with updates on various ongoing campaigns and investigations. We are on track to reach our goals and will continue to take advantage of opportunities that may arise.

Please note: Some information provided below has not been released to the public and is considered confidential.

Animal Equality proposed and has made progress toward achieving the following objectives by August 2020 in support of its investigative efforts in Latin America and the fish industry: 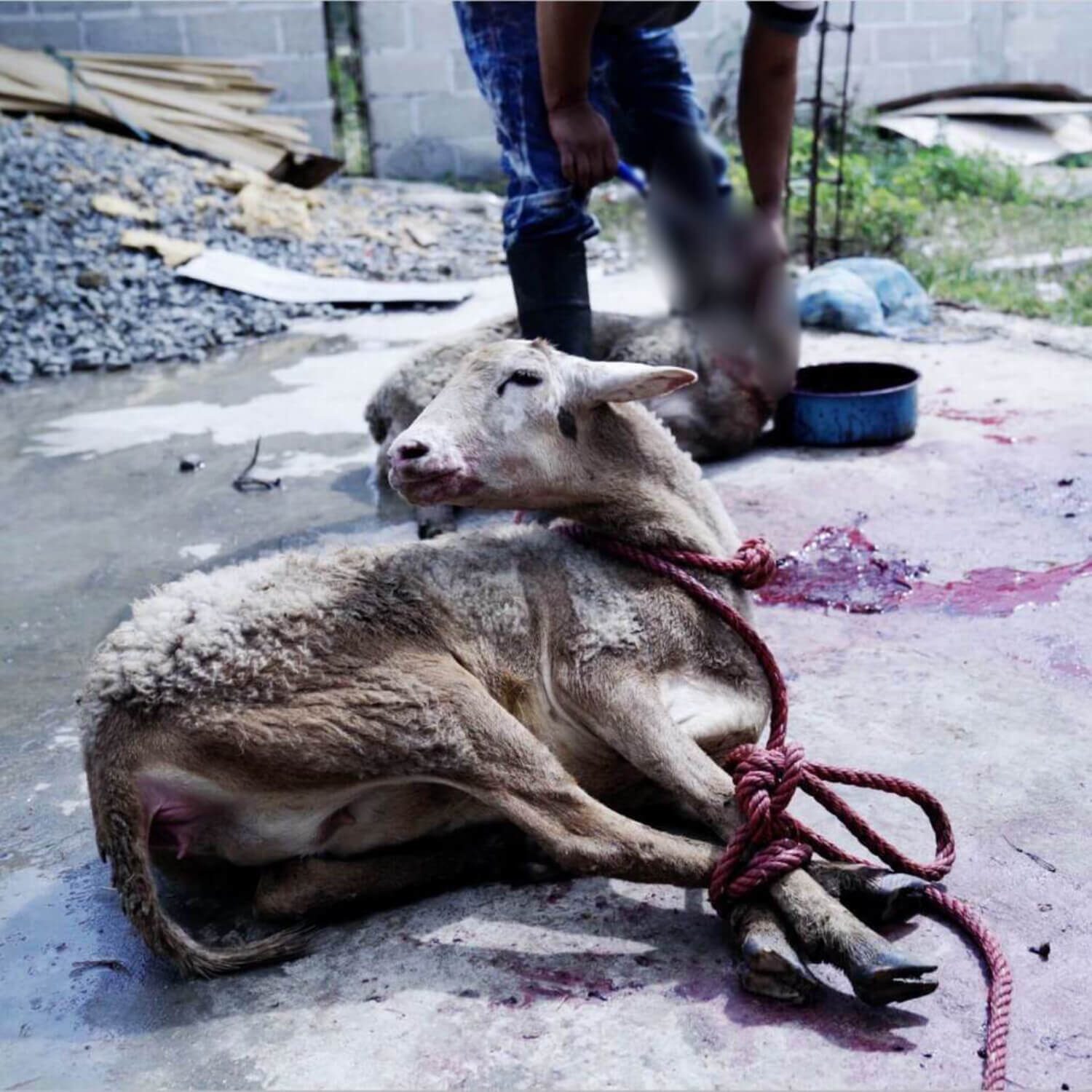 Animal Equality released an investigation focused on Mexico’s illegal, backyard sheep slaughterhouses. This investigation brings to light the cruel treatment and slaughter of lambs and sheep within Mexican states which have the largest number of these animals in the country.

Our footage shows the brutality with which these animals are killed, including animals dragged by their limbs and violently slaughtered; lambs fully conscious as they are tied-up and decapitated; animals mortally injured and left to bleed to death. Our investigators also witnessed workers violently transporting lambs and killing more than three lambs at the same time, one next to the other. Our investigators also documented minors witnessing the killings and in some cases, carrying out the slaughter of the animals, all with no veterinarian present. 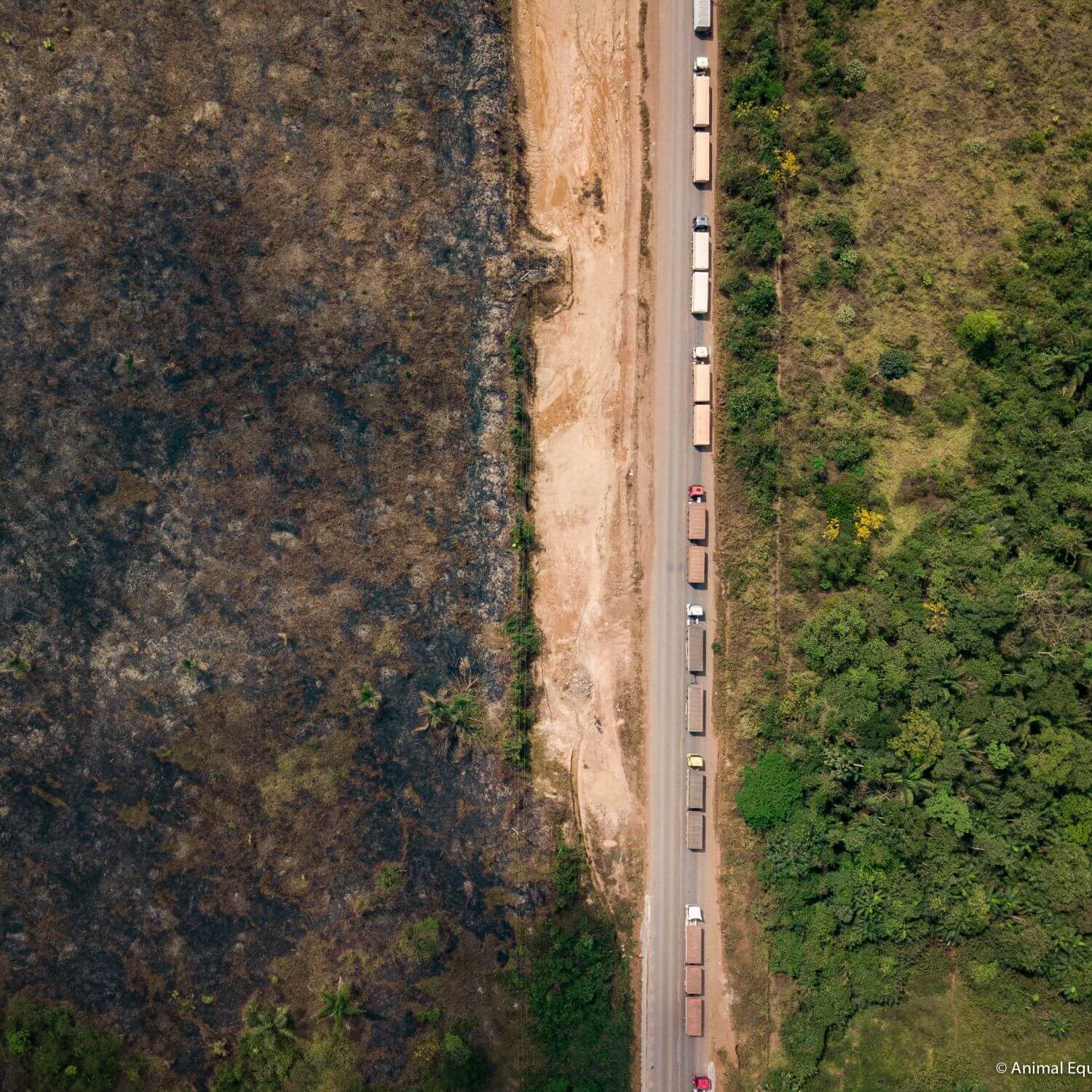 Immediately following this horrendous act, Animal Equality Brazil launched a campaign encouraging people to reduce or stop eating animal products. The campaign also highlights that aside from animal farming, deforestation is also driven by the cultivation of feed for farmed animals.

Ongoing Work in Mexico
Animal Equality’s investigative team filmed slaughterhouses in the state of Hidalgo, demonstrating that the cruel slaughterhouse practices documented in our previous investigations in the state of Jalisco are also present in this state. One of the most horrific findings was a slaughterhouse that hung conscious pigs from chains and hoisted them above the other pigs who were forced to watch as their necks were cut. Our team also filmed an investigation in Jalisco utilizing drones to show the environmental impact of factory farming. The footage will be released shortly along with a complaint to local authorities requesting to end the discharge of waste from a massive pig and hen complex into nearby waterways. Lastly, Animal Equality investigators just completed an investigation that highlights the need for enforcement of animal welfare standards during transport. In order to develop a national law to protect animals in Mexican slaughterhouses, it is important to link slaughterhouses to federal regulations.

This grant also supported the production of Animal Equality’s fourth iAnimal video, which features the conditions in which lambs, goats, and sheep are raised and slaughtered in Mexico. The additional support allowed our team to network with local farmers to gain access and openly film inside the facilities, and also provided the opportunity for our investigators to document more stages of a sheep’s life cycle in production.

Ongoing Work in Brazil
Animal Equality’s investigative team has begun a grand survey of Brazilian slaughterhouses across the country’s main agricultural regions to document the current conditions. We’ve completed two trips, in São Paulo and the state of Para, with four remaining trips planned for this year. These investigations will enable us to document the abysmal conditions animals endure in Brazilian slaughterhouses and release our findings to the general public. The first release will target pigs on factory farms, followed by hens on egg farms. The project will culminate with a test case, working with Brazilian prosecutors to achieve the first animal cruelty charges filed for animal cruelty on a factory farm or in a slaughterhouse.

Fish Industry
In the European Union, we have completed a farmed fish slaughterhouse investigation, that documents thousands of salmon being slaughtered and shows the bloody reality of how fish are slaughtered for a major salmon brand. We are having the footage reviewed by renowned fish pain expert Dr. Lynne Snedden.

We have two more fish farm investigations planned–one in the European Union and one in Latin America. These investigations will be completed in the next few months.

Staffing
Animal Equality has hired International Investigations Analyst, John Hopkinson, to work with the International Director of Investigations in conducting research, compiling evidence and writing reports on factory farming industries examined through field investigations and document analysis. Prior to coming to Animal Equality, John worked as a Support Staff Supervisor at the Oregon Department of Justice, as well as the Investigations Program Coordinator for the Oregon Humane Society. He earned his B.S. from the University of Illinois, Urbana-Champaign and his J.D. from Lewis & Clark Law School.

Animal Equality proposed and has made progress toward achieving the following objectives by August 2020 in support of its legal program: 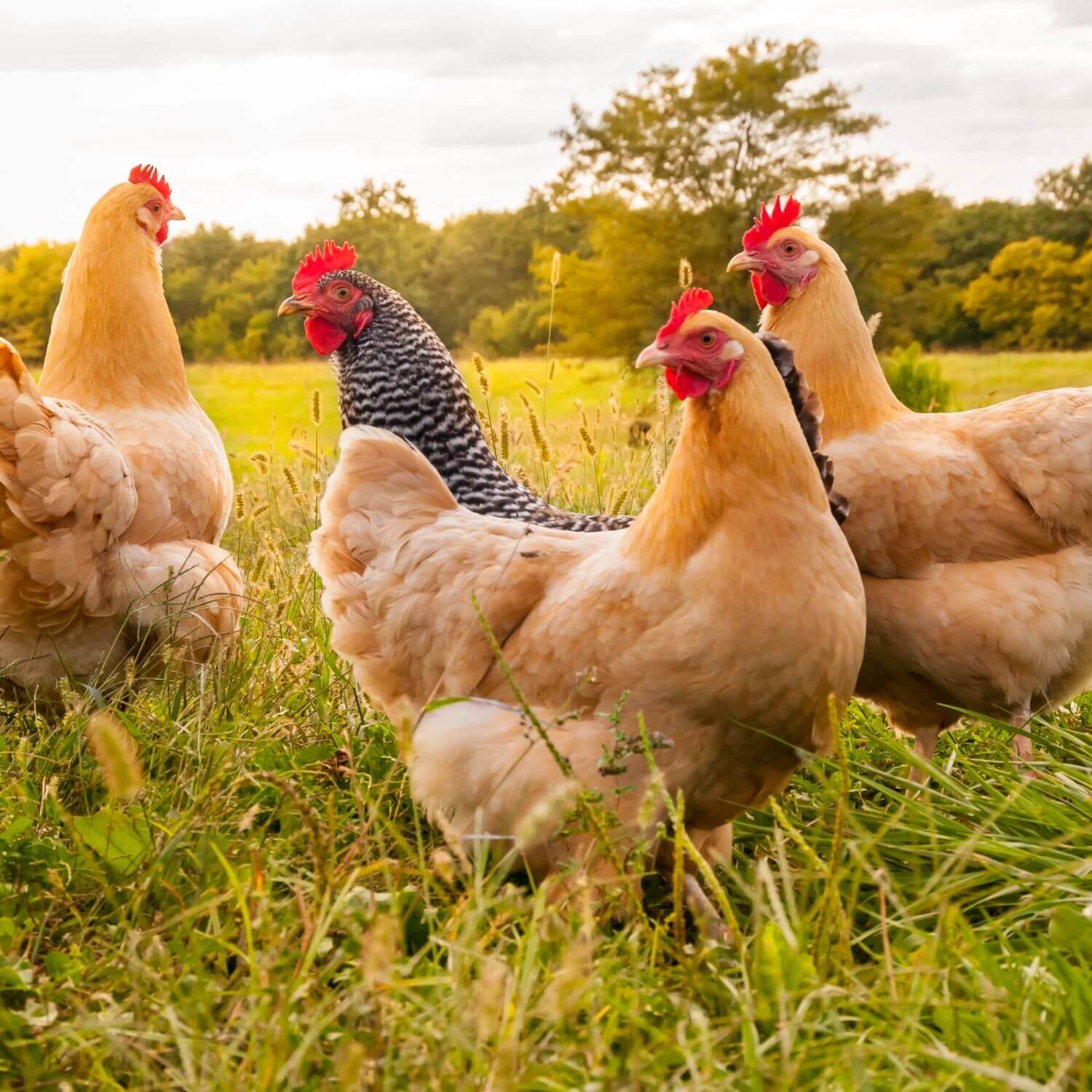 Animal Equality has been very active in supporting legislative efforts to ban some of the cruelest forms of confinement in several states. These efforts led to the passage of a law in Michigan banning the production and sale of eggs from hens in cages, and guaranteeing hens in the state a minimum amount of space per individual. This success marks the first passage of such a law in a Midwestern state. Similar legislative efforts to ban the production and sale of certain cruelly produced products are underway in Maine, Massachusetts, and Hawaii, with additional initiatives in Colorado and Arizona scheduled to launch soon. 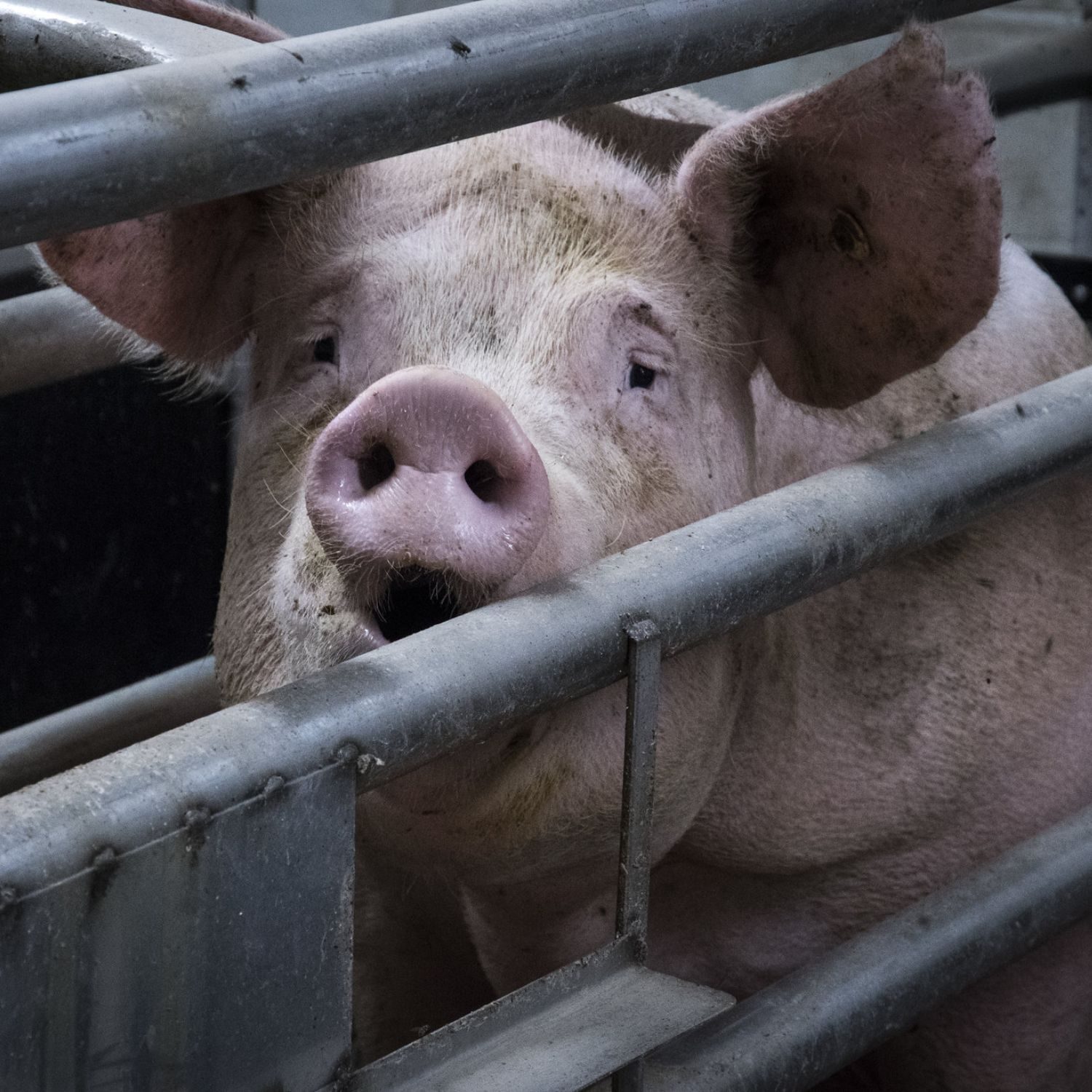 Animal Equality is participating in six ongoing lawsuits. These lawsuits include a constitutional challenge to Arkansas’ Ag-Gag law, two deceptive advertising lawsuits against Tyson Foods and Hormel, two lawsuits related to California’s Prevention of Cruelty to Farm Animals Act, and most recently, a lawsuit against USDA seeking to strike down the agency’s new inhumane pig slaughter rule. Cases currently in development involve the continued strategic use of consumer protection statutes to call out inhumane treatment by various brands, as well as cases involving some novel legal claims.

FOIA Program
Animal Equality launched its Freedom of Information Act (FOIA) Program which involves submitting quarterly records requests to the USDA in order to obtain documentation of the conditions and treatment of animals at federally inspected slaughterhouses. The information from the requested records will greatly benefit our proactive litigation and case development, providing insight into the types of systemic violations common in the slaughter industry, as well as identifying the worst actors.

Legal Support Following Investigation
From late 2019 to early 2020, Animal Equality’s legal team analyzed evidence presented from four different investigations (one in the U.S., two in the U.K., and one in Italy), and assisted in the preparation of legal documents associated with each. These documents clearly outline the evidence and explain to authorities how this evidence amounts to actionable violations of law. In addition to submitting our legal analysis to law enforcement and encouraging prosecution, our legal team is developing a comprehensive arsenal of additional legal and public-pressure tools to use in the wake of each investigation, to urge corrective action and ensure the documented offenses come to an end.

Staffing
Animal Equality hired an additional associate counsel, Anjali Nowakowski, to advise and support the organization in matters related to legal compliance and risk management. Prior to joining Animal Equality, Anjali worked as an attorney for nearly six years at several firms, including her own practice, and brings comprehensive experience in the law of intellectual property, data privacy and security, commercial contracts, and business transactions. She earned her B.S. from New York University and her J.D. from New York University School of Law.

This grant played a vital role in the growth of Animal Equality’s Investigations and Legal Departments, allowing each to work towards their goals in an effective manner.

Thanks to GRACE Communication Foundation’s generous funding, Animal Equality has been able to conduct a variety of investigations and legislative campaigns, resulting in new protections for millions of farmed animals, tremendous media attention, and increased public awareness to the cruelties of industrial farming.