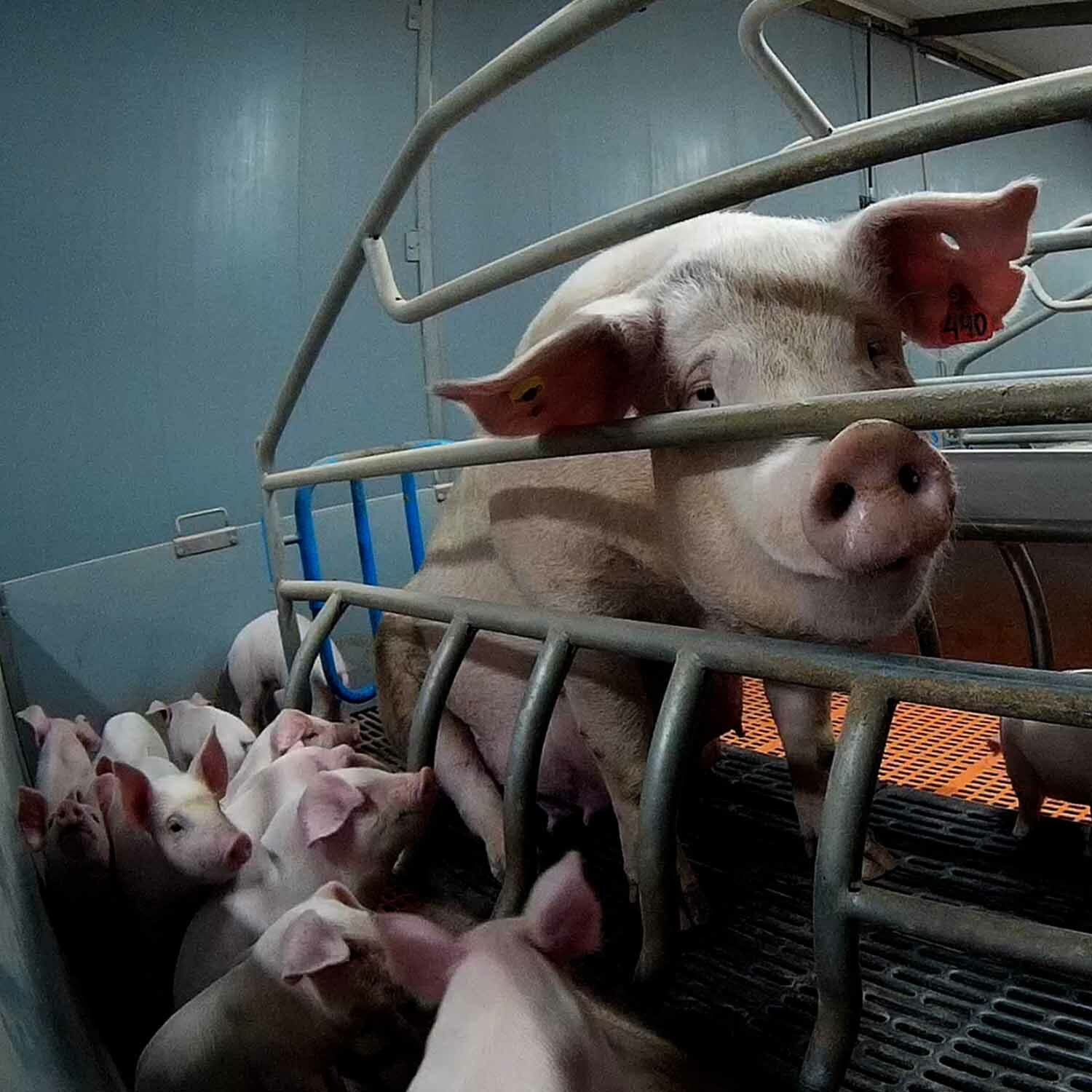 A Letter from Jane, An Animal Equality Undercover Investigator

Jane is an Animal Equality undercover investigator who exposes some of the worst abuses to animals inside factory farms. The images she captures are changing the course of history for farmed animals. But this is not just her fight. In this special letter she wrote you, Jane explains how you, too, have the power to save animals!

As an investigator going undercover into factory farms, it’s normal to build a wall inside of you to separate yourself from the terrible things you see.

It is both a natural defense mechanism and the result of years of experience and training.

Much of what I record with my camera is very bleak, but there are a few things I keep close to my heart to keep me going.

There are moments I share with the animals I see.

When I was on the pig farm and no one was looking, I would talk to the mother pig trapped behind the farrowing crate’s bars.

It was very hard to look into her eyes, knowing she had no chance of escaping. But for those brief moments, I wanted her to feel affection for once in her life.

When I saw the piglet being taken away, I saw the man was clutching a gun in his hand. I knew at that moment I would never see the piglet again. And I promised myself that I would do everything I could to uncover the truth. If not for these animals, then for the animals just like them who are yet to be born.

Their memory, and the memories I hold of thousands of others, keep me going.

I also have the support of the Animal Equality team. I work with them because they can turn those stories into real, concrete change.

Seeing a piece of footage I have recorded turn into a moment of national importance is powerful. It reminds me that every moment, no matter how terrible to witness, could be the spark that brings about change that helps animals.

The stories we tell are heard all over the world. They inspire people everywhere to take action for animals and make more compassionate choices in their lives.

They also act as the evidence needed to drive global companies and governments to make unprecedented changes.

And then there is you. I will probably never meet you, but I feel the warmth of your support everywhere I go.

The industry I am uncovering is immensely rich and powerful. They employ thousands and thousands of people, many more than animal advocates could ever afford to.

But with you and all the other people who have chosen to fight for animals, animals stand a chance.

But unfortunately, that isn’t possible.

As hard as it is for me, I have come to accept that the animals I see will never be saved. That is not something I have the power to do.

But you do have the power to save the animals of the future. The animals who are yet to be born and without your help will face the same fate as the animals you see today.

With every investigation they release, the Animal Equality team is changing the course of history. But if they are going to truly succeed, they need your support today.

I know you may feel like it won’t make a difference. I have faced many moments where change seems impossible.

Sometimes it feels as if nothing is happening; other times it seems to all happen at once. But change is happening, always.

And the next big moment of change – like any of the huge victories that have been achieved in the past – could be right around the corner.

It could happen with the next investigation.

Please, if you are in a position to give, support Animal Equality and future investigations by making a donation today.

Animal Equality doesn’t receive billions of dollars in revenue like the companies it uncovers. It’s a US charity, and it’s driven by people like you.

I’m asking today because you’re part of a special group of people who have decided to help animals. After all, isn’t that why you’re reading my letter?

I know the next investigation we conduct is going to be important.

The simple fact that you’re reading this reminds me that my work is being felt beyond the concrete walls of the farms I work on. And I feel a sense of resolution that the stories of the mother pig and the other animals have made it out alive, even if they never did.

I hope you will support me. It means so much to me.